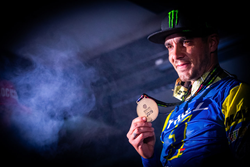 In my mind I saw this coming, but it’s been a challenging year. I felt good coming into this last race with a shot at winning the title and I just tried not to let it get the better of me and let it happen. It feels awesome. Sam Hill

Monster Energy congratulates Sam Hill (AUS) on winning the Enduro World Series championship title in Zermatt, Switzerland. There’s nothing like a little drama to keep things interesting. It came down to the fifth and final stage of the last race of the year, but Hill successfully defended his Enduro World Series title and took home the championship for the third consecutive year.

In the shadow of the Matterhorn and the towering Swiss Alps in the town of Zermatt, Hill got to work early Saturday morning with a singular goal in mind, winning the series overall. Sitting in second overall coming into the race, Hill had his work cut out for him, but as he put it after Whistler “It’s really easy; To win the championship, I just have to win the queen stage and the race.” Long, rocky alpine stages covered over 33 miles of racing over 5 stages. With 2,800 feet of vertical to climb, and another lift assisted 12,000 feet, it was a huge day of racing.

The Australian cycling legend would end up in second for the weekend, 12 seconds behind the eventual race leader but took home the win on the final, massive nine-minute stage of the weekend. Dubbed the “queen stage” the winner banked an additional 40 points in the series overall, which was enough to secure the title for Hill. Not only did he win it, he crushed his nearest competitor by 7 seconds and put 17 seconds into his closest rival in the points chase.

Hill was thrilled to take home the title for the third year in a row, especially after a tough start to the season.

“In my mind I saw this coming, but it’s been a challenging year,” said Hill. I felt good coming into this last race with a shot at winning the title and I just tried not to let it get the better of me and let it happen. It feels awesome. Every time you win it’s a good feeling, but to be able to back it up for the third year in a row is awesome. There were a couple of wild sections this week, but I was just swinging off the back. You have to take matters into your own hands and make it happen sometimes so that’s what I did.”

Hill now becomes the only man in EWS history to take home three series titles. With both Downhill and Enduro titles, Monster Energy’s golden child now has 8 World Championship titles to his name and isn’t showing any signs of slowing down. EWS racers will now head to the Italian Riviera, in Finale Ligure to compete for the inaugural “Trophy of Nations”. The top three riders from each nation will compete as a team to battle for national honor and a coveted UCI Rainbow world championship jersey. Hill will be joined by fellow Monster Energy racer Connor Fearon, who is coming off of a fantastic World Cup DH season." I think the Trophy of Nations next week will be an interesting format and we’ll see how it all works out,” an excited Hill quipped.

Stay tuned to see if Hill can add yet another title to his trophy case come next weekend.