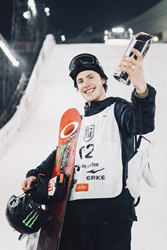 Monster Energy congratulates team rider Sven Thorgren on taking first place in Snowboard Big Air at the Air + Style World Cup Beijing in China this weekend. In front of an energetic crowd at the famous Bird’s Nest Stadium, the 24-year old from Stockholm, Sweden rose to the top of a stacked field of elite big air snowboard riders in a World Cup event sanctioned by the International Ski Federation (FIS).

Air + Style started in 1994 as an invite-only snowboard competition in Innsbruck, Austria, focused on big aerial stunts. Over the years, the stadium event featuring the world’s most talented freestyle snowboarders has grown into a global series that blends live music, action sports, art, and culture. Since 2010, Beijing has been a steady stop on the Air + Style circuit and the 2018 edition marked the third out of four 2018/19 World Cup Big Air events after competitions in Cardrona (New Zealand) and Modena (Italy).

Thorgren stepped into Air + Style Beijing freshly recovered from recent shoulder surgery. Qualifying for the highly contested finals in first place, he left no doubt that he had reclaimed his “Svenergy”. As the final eleven riders attacked the massive centerpiece jump with their most technical aerials, Thorgren was facing heat from his Monster Energy teammate Max Parrot and Japan’s Takeru Otsuka.

Rising to the occasion, Thorgren posted a highly contorted backside 1440 nose grab over the gap for a solid 90.25-point score and an early lead. As the action moved into second attempts, Thorgren found himself leapfrogged by Parrot and Otsuka – so it all came down to the last and final run of the evening. Reaching deep into his bag of tricks, Thorgren pulled a high-flying frontside triple cork 1440 mute – the highest-scoring trick of the entire men’s competition – for 93.75 points and the win.

“I haven’t landed the triple frontside 1440 ever in a competition, and having it all come down to the last trick. I’m just happy I put it down!” said Thorgren after claiming first place in Beijing on Sunday, adding: “It’s also crazy after what I’ve been through in the last year, three shoulder surgeries. The win is amazing!”

The win at Air + Style Beijing is a comeback for Thorgren after recovering from a shoulder injury that sidelined the ultra-progressive freestyle snowboarder for large parts of the season. His recovery is chronicled in the mini documentary ‘Back on the Horse’ presented by Monster Energy and everyone at Monster is stoked on his return to winning form. Thorgren first became hooked on snowboarding at the age of 7 and has since emerged as a force of progression inside and outside the contest arena. Known for his technical bag of tricks, he has won gold in Snowboard Slopestyle at X Games Norway 2017 and Slopestyle bronze at X Games Aspen 2015.