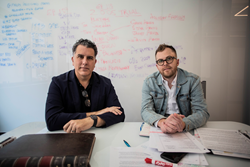 Ninth Planet is creating compelling original podcasts that have our (Luminary) listeners coming back for more. Their shows take the audience on deep investigative journeys with fascinating and addictive story-telling.

Mosaic Media has launched a new podcast production company, Ninth Planet Audio, in a deal with premium podcast platform Luminary Media. The first of their multi-series podcast deal launched in May as a part of Luminary’s Premium offering with the 13-part nonfiction docuseries TELEPHONE STORIES: THE TRIALS OF MICHAEL JACKSON. Ninth Planet is also announcing the late 2019 launch of their second show on Luminary, VILLAINS, a riveting new series chronicling the UK’s Great Train Robbery, currently in production with Executive Producers Will Green and Aaron Ginsburg at The Cut, and Ben Adair at Western Sound.

“Ninth Planet’s partnership with Luminary opened the door for Mosaic Media to further expand our portfolio and digital platform,” said Mosaic’s Principal Jimmy Miller. “Luminary has been a phenomenal partner and TELEPHONE STORIES sets the bar high in production quality and in-depth reporting. We are looking forward to reaching new listeners, both in the US and abroad, with the launch of VILLAINS as we continue to provide groundbreaking series for Luminary’s devoted audience.”

“Ninth Planet is creating compelling original podcasts that have our listeners coming back for more,” says a spokesperson from Luminary. “Their shows take the audience on deep investigative journeys with fascinating and addictive story-telling.”

TELEPHONE STORIES: THE TRIALS OF MICHAEL JACKSON returns from a four-week hiatus on Sunday, July 28, 2019 with episode 8, and episodes 9 to 13 airing consecutive Sundays after that. Hosted by Brandon Ogborn and Omar Crook, the 14-hour, 13-part investigative docuseries is the most intensive look at Michael Jackson’s 1993 accusations and criminal investigation of sexual abuse and his separate, media-circus criminal trial in 2005 to date. More than two years in the making, Ogborn interviews Jackson’s attorneys & friends who defended him, the investigators and prosecutors who tried to convict him, and the journalists and reporters who covered the saga. The show takes an unbiased deep-dive into the convoluted life of the King of Pop, piecing together a chronology of what took place with surprising revelations along the way.

“Our aim in this was to tell the whole story, exploring it from many different perspectives, and that required us to do so on a large scale where we could take our time with it,” said Ogborn, who is also a comedian and screenwriter turned investigative journalist. “The beauty of doing it as a podcast is it allows space for the people who were part of these firestorms to share their points of view on the events unfolding. You don’t just get quick sound bites. It kind of begins to exist in your mind as something more than tabloid gossip, something closer to Greek Tragedy.”

Ninth Planet’s next Luminary podcast VILLAINS debuts later this year and tells the story of a group of self-described British "villains" who pulled off the largest cash heist in UK history in 1963 -- The Great Train Robbery. Host William Green grew up listening to stories of the Great Train Robbery because his own father “worked and played alongside” some of its key players, who stole today’s equivalent of $67 million dollars in cold, hard cash. Green will offer an intimate look inside the crime of the century by introducing us to villains from that era and the wives and children whose husbands and fathers took part in the historic caper.

“Working with Ninth Planet Audio has been a wonderful experience, allowing me to explore my family’s history and to sort out fact from myth,” says Green. “A podcast series is the ideal format to provide exclusive access and give an intimate insider’s look at one of the world’s most notorious crimes and the people it impacted, for better or worse - and besides, villains don’t mind being heard but hate being seen.”

About Mosaic Media
Mosaic is a management and production company based in Los Angeles representing a range of clients from actors like Will Ferrell, Jessica Chastain, Tessa Thompson, and Kumail Nanjiani to writers and directors like Judd Apatow, Jay Roach, and Barry Sonnenfeld. Mosaic’s production arm has produced film and TV including TALLADEGA NIGHTS, STEPBROTHERS, BAD TEACHER, DOWNWARD DOG, and WEIRD CITY.

About Ninth Planet Audio
Ninth Planet Audio is a podcast production company launched by Mosaic Media focused on producing premium original series for all audio platforms. The company has a diverse slate of shows in various stages of production and development spanning true crime, to docuseries, to scripted comedy, all of which feature compelling storytelling and powerful voices.

About Luminary
Luminary is a podcast technology and content company offering a free podcast app with simple user interface and smart content discovery, and a premium subscription network of top quality and premium podcasts available only on Luminary. Driven by the singular mission to improve the podcasting experience for both listeners and creators, Luminary is making it easier for podcast listeners to find great content and for podcast creators to do their best work. Luminary Premium will have more than 40 shows and more than 1,000 hours of premium originals available only on Luminary, featuring some of the most recognizable voices in podcasting, legendary entertainers, and diverse and emerging voices. The free Luminary app -- where listeners can listen to Luminary Premium shows and their favorites among hundreds of thousands of publicly available podcasts -- is available for free on iOS, Android, and web. For more information, visit luminarypodcasts.com or follow @hearluminary.