Past Present Future: a tense balance launched during the Seattle Design Festival, encouraged the community to engage in a positive conversation about what the past, present and future of Seattle should look like. 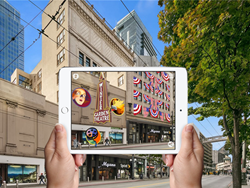 Julia Beabout, CEO of Novaby, explains: “Placemaking boosts the social, cultural and economic value of spaces by fostering a deeper relationship between the people and the places they inhabit"

Seattle’s warp-speed growth has led to unintended consequences that have not only thrust the city into the national spotlight this past year, but struck at the very heart of the kind of city Seattle aims to be. Frustrated with the rhetoric, one Seattle startup has taken the conversation to the literal street at the center of the controversy: 3rd Ave between Pike and Pine.

Novaby, a digital art production company, has created a location-based, mixed-reality Placemaking experience with the goal of moving the needle in a positive way on this historic but often overlooked block. This first-of-its-kind digital approach uses viewer’s mobile phones to recreate neighborhood stories and historic building features in augmented reality along with a new 46 story skyscraper under development on 2nd Ave.

The digital experience called Past Present Future: a tense balance was launched during the Seattle Design Festival in collaboration with Raven & Fox Design and Cognuxant. It invites viewers into a fun and surprising conversation about how to balance the past with the present and future demands that rapid growth brings.

What is Placemaking? And why does it matter? Julia Beabout, CEO of Novaby, explains: “Placemaking boosts the social, cultural and economic value of spaces by fostering a deeper relationship between the people and the places they inhabit. Augmented reality technology enhances this by revealing otherwise hidden qualities, opening locations in new ways, and making them more accessible, enjoyable and relevant to a wider number of people.”

Novaby sees the experience as a way to give back and offer value to their community in terms of social cohesion, cultural richness and environmental sustainability. The goal of the experience is to build social capital around 3rd and Pine by creating a positive presence that encourages the community to visit the area, learn about its history and significance, and experience what it means to those that live and work there.

Past Present Future: a tense balance is free and open to the public. It will be reprised as an event in the spring and summer of 2020. In the meantime, interested participants can arrange for individual or group tours here

About Novaby: Novaby is a global digital art production company and animation studio specializing in 3D content and augmented reality. You can follow their AR Placemaking initiatives in Seattle and around the country on Facebook, Instagram and LinkedIn