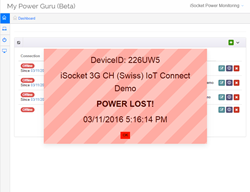 The company recently announced the availability of iSocket 3G for additional countries – the new smart plug that operates - regardless of Wi-Fi - via the mobile network and sends power failure alerts directly to a mobile phone. The iSocket 3G device also has a standard socket to which any appliance that has a standard plug can be connected for remote switching or rebooting in areas where Wi-Fi is not available, or where a user needs to reboot a Wi-Fi enabled device, such as a router.

My Power Guru is the new service from iSocket Systems that now allows business customers with several locations to monitor power outages through one central web interface and immediately receive alerts online. The service also gives the facility the option to reboot appliances through the same web interface. The company demonstrated the service to visitors at their stand at The IoT Connect Show in London ExCel today.

“It has been a long journey to get to this point," said Denis Sokol, CEO of iSocket Systems. “We pioneered the technology in 2011, but we’ve been focused on selling the hardware for power cut monitoring and rebooting – our iSocket gadgets. We thought that private users would be the main target group, but the demand has been higher from business customers for these applications. For example, Verizon Enterprise uses our iSockets to monitor power to their customers’ routers all over the world. Some customers use iSocket to reboot ATMs or visit counters in supermarkets when they stop working. One customer uses it to control cameras that monitor surfers along the coasts in the USA. In all of these applications, the integration of iSocket has allowed customers to reduce the cost of maintenance. But they have always asked us for a facility for efficient power outage tracking for their locations - centrally - via a web interface. So, now we have introduced this service.”

The new service is available globally, because the hardware – iSocket 3G Smart Plug – is available with plugs/sockets of 8 different configurations - suitable for almost all countries in the world. For the rest of the world, the company plans to create a plugless solution.

At the moment, the customer has to pay a one-time cost for the equipment – iSocket 3G – for each location. Investors are being sought for a future business model where hardware will be provided free up-front and replaced in the event of failure for the duration of the agreement.