In a landmark for DACA recipients, including those from the African Diaspora, the NAACP celebrates today’s Supreme Court’s ruling in its favor against the Trump administration in NAACP, et al. v. Donald J. Trump, et al. 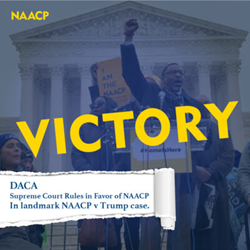 In a landmark for DACA recipients, including those from the African Diaspora, the NAACP celebrates today’s Supreme Court’s ruling in its favor against the Trump administration in NAACP, et al. v. Donald J. Trump, et al. (Case number: 18-5243, Appellate - DC Circuit).

This case was consolidated with the Department of Homeland Security v. Regents of the University of California. The Supreme Court held that the Department of Homeland Security’s decision to rescind DACA is reviewable under the Administrative Procedures Act and was arbitrary and capricious. Further, the Supreme Court determined that the administration did not follow the legally mandated procedures, nor did it weigh how ending the program would affect those who had come to rely on its protections against deportation and the ability to work legally. In a 5-4 opinion authored by Chief Justice Roberts, the Supreme Court affirmed the district court’s ruling in the case brought by the NAACP.

“For far too long, the voices of the undocumented DACA recipients from the African Diaspora were silenced. There is no democratic dream for anyone if we don’t allow our DREAMers to fully participate."

This is a tremendous victory for America.

Today’s Supreme Court ruling in our favor is an incredible victory for justice, in the spirit of the NAACP’s groundbreaking Supreme Court victory in Brown v Board of Education. We know the value of affirmative litigation to ensure that the nation lives up to its ideals. This ruling exemplifies the ways in which ensuring the Civil Rights for our community pushes the needle on social justice for the benefit of all.

Although today represents an exciting victory, we won a battle; the war wages on. Trump could rescind DACA again tomorrow if he wants. The fight truly ends when Congress passes a permanent solution that protects DREAMERS, and the NAACP will continue that fight along with its allies.”

The NAACP, represented by attorney Joseph Sellers of Cohen Millstein, was joined in this lawsuit with the American Federation of Teachers and the United Food and Commercial Workers International Union.

Founded in 1909 in response to the ongoing violence again Black people around the country, the NAACP (National Association for the Advancement of Colored People) is the largest and most pre-eminent civil rights organization in the nation. We have over 2,200 units and branches across the nation, along with well over 2M activists. Our mission is to secure the political, educational, social, and economic equality of rights in order to eliminate race-based discrimination and ensure the health and well-being of all persons.