Nebraska Artist Turned Writer, Deven Rieck’s New Book “The Will of My Father” is the First in a Series of a World War III Post-Apocalyptic Series

Recent release “The Will of My Father” from Page Publishing author Deven Rieck, is a vividly imaginative interpretation of a not-too-distant future as mankind is left reeling in the wake of a nuclear holocaust following World War III. 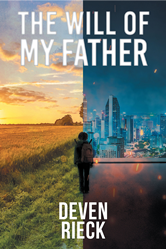 Deven Rieck, a Lincoln, Nebraska based artist and volunteer with the ArtReach project, has completed his new novel “The Will of My Father”: following Sainath, a talented artist who lives simply, as his life goes from the typical—spending time focusing on his artwork and spending time with his girlfriend—into a daily struggle for survival as the nations of Earth have used their most lethal weapons against one another, and Sainath is one of the few humans to escape death.

“In the midst of Sainath’s content life, World War III is about to become unhinged,” Deven Rieck said of the plot of his novel. “Sainath and his girlfriend Emily, brace for impact as a nearby nuclear missile vaporizes their quaint hometown into rubble. In the aftermath of the destruction, Sainath rises from the ashes as one of the few humans left alive. Sainath quickly finds his ancestral blood is the key to humanity’s prosperous new beginning—or its diabolical end.”

Published by New York City-based Page Publishing, Deven Rieck’s original spin on the theme of a survival story, features an under-represented hero: an adopted child. The novel depicts demons and supernatural encounters without removing the reader from the terrestrial world.

“As Sainath searches for answers to his survival, an ancient prophecy has awoken from the blast and a battle of good and evil begins,” Deven Rieck continued about the plot of his work.

Readers interested in Sainath’s struggle against geopolitical, personal, and mystical upheaval can purchase “The Will of My Father” at bookstores everywhere, or online at the Apple iTunes store, Amazon, Google Play or Barnes and Noble.

About Page Publishing:
Page Publishing is a traditional New York based full-service publishing house that handles all of the intricacies involved in publishing its authors’ books, including distribution in the world’s largest retail outlets and royalty generation. Page Publishing knows that authors need to be free to create - not bogged down with complicated business issues like eBook conversion, establishing wholesale accounts, insurance, shipping, taxes and the like. Its roster of authors can leave behind these tedious, complex and time-consuming issues, and focus on their passion: writing and creating. Learn more at http://www.pagepublishing.com.