MCP Books brings to remembrance a war America has forgotten. 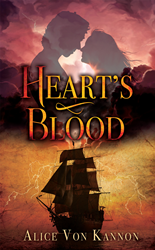 Heart’s Blood is the fictionalized story of an American seaman enslaved in Algiers.

Many Americans have forgotten the Barbary Wars, fought by a fledgling United States against the Barbary States of North Africa. We see stories of pirates and slavery on the news and think of it as something far away; however, over a million European Christians were enslaved through piracy and raids during the 16th to 19th centuries.

Von Kannon’s book returns readers to 1803, when Captain Isaac McCallister finally returns home to Salem, Massachusetts after five years in slavery. While he deals with the ghosts of his past, he is intrigued by a young painter named Eleanor. Betrayal and murder are the unwitting byproducts of his return, which awakened an ancient family feud.

“Heart’s Blood is the fictionalized story of an American seaman enslaved in Algiers. The character of Captain Isaac McCallister is a composite of the thousands of Americans who were enslaved by the Barbary States of North Africa, the former nations of Algiers, Tripoli and Tunis. It’s a story that resonates across two centuries and into the present,” said Von Kannon.

Alice Von Kannon is an author and historian who has written for TruTV, History and the Discovery Channel, as well as appearing in several TV documentaries, including America: Facts vs. Fiction, Inside Secret Societies, Codes and Conspiracies for American Heroes Channel, America’s Book of Secrets and Hunting the Lost Symbol. She attended California State University Northridge and L.A. Valley College, and worked many years in advertising as a writer and broadcast producer. Alice has traveled widely in Europe and the Middle East, and has written extensively on the subject of the Barbary Wars and the birth of the United States Navy. She is also the co-author, with her husband Chris Hodapp, of several books in the popular “Dummies” series for Wiley Publishing, including Conspiracy Theories and Secret Societies for Dummies and The Templar Code for Dummies.

Heart’s Blood is her first historical romance, and grew out of her love for the town of Salem, Massachusetts, and its glory in the age of tall ships. She presently lives with her husband Chris, landlocked in Indianapolis, Indiana.

MCP Books is a division of Salem Media Group. Heart’s Blood is available online through amazon.com and barnesandnoble.com.