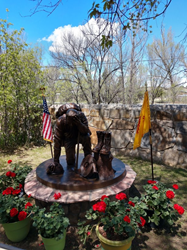 This dream project could not have been possible without the kindness and patienceof Matt Glenn owner of Big Statues, LLC. in Provo, Utah. Who had the confidenceand gave Ms. Long the courage and endurance to press on.

After Fire Fighters from New Mexico returned from the Northwest complex fires, they mentioned that they had stopped at many fallen fighter memorials throughout the Northwest and stated how moving it was to see a memorial with so much emotional impact on the visitor, and how the memorials had valued the ultimate sacrifice the Fire Fighters made.

Bennie Long, Forester Supervisor of the Smokey Bear Historical Park (SBHP) in Capitan, New Mexico started researching New Mexico to see if they had a Fallen FireFighter Memorial. To her dismay she found there was not one in New Mexico, so she contacted the Smokey Bear Hometown Association (SBHA), a 501© 3 non-profit organization SBHP friends’ group, and proposed to them that they consider supporting the idea of the memorial at the Park.

It wasn’t long before she received her approval from State, Local, and private administrations to proceed with her dream project of placing the first and only New Mexico Wildland Fallen FireFighter Memorial at SBHP. When first asked where the memorial would be placed she stated, “what better place than Smokey Bear Historical Park where visitors come from all over the world to learn about Smokey Bear and fire prevention.” Since the Park’s inception, the Smokey Bear message has evolved into a significant fire ecology and educational destination. Visitors come from all over the country and the world to learn about Smokey Bear Historical Park, Smokey’s fire prevention message, and the history of Smokey Bear in the heart of Lincoln County New Mexico.

Bringing this proposed memorial to the park would enhance the visitor experience and inform them of the ultimate loss that can occur. We at SBHP believe this Memorial will continue to educate the public in fire safety, defensible space, and ultimately educate the public about fire suppression efforts to keep lives, homes property, and natural resources out of harm’s way.

The purpose of this memorial is dedicated to honor the New Mexico wildland fallen firefighters and fire support personnel who lost their lives in the line of duty, and to reflect on this memorial to help us remember the sacrifice that these brave, unselfish souls gave in paying the ultimate price. There are 32 names placed on the plaque.

This dream project could not have been possible without the kindness and patience of Matt Glenn owner of Big Statues, LLC. in Provo, Utah. Who had the confidence and gave Ms. Long the courage and endurance to press on. The Memorial funding of $50,000 took approximately one year and a half to complete. And was entirely paid for by donors who understood the vision of this undertaking. We would like to thank all our donors large and small, who believed this memorial was needed to remind us of the sacrifice that these brave men and women have paid. It was through Mr. Glenn’s guidance and total support of this project that the project came to life. It has been placed under the shade of the Box Elder tree in SBHP’s outside interpretive gardens.