In “Simon’s Mansion” (ISBN 1729078435), the third book of his LGBT literary fiction series, author William Poe writes compellingly about his native Arkansas to pen a work of US historical fiction that finally includes the too-often-overlooked stories of gay and lesbian small-town Americans. Simon's Mansion is a moving coming-of-age story about a man finally figuring out how to grow up. 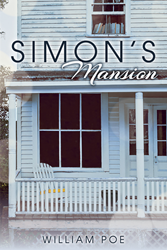 When the man Simon loves disappears into thin air, he must go back to the beginning to find the truth.

Simon didn't think he would ever go home again, but to plan for his future, he needs to face his past. For Simon, the family mansion in Arkansas is a part of him. He may have fled small-town life for a path that led to cocaine addiction, but he has found his way home. Now, all that's left is for him to face those he hurt along the way. As Simon navigates his constant internal struggle between faith and atheism, he must make decisions that will forever alter the course of his life.

Simon Powell was a follower of the Reverend Sun Myung Moon and his cultish and highly controversial Unification Church. After breaking with the church, Simon becomes a successful Hollywood film distributor, but self-doubt leads to drug addiction. Simon eventually returns to his hometown in Arkansas and seeks help, still haunted by personal struggles with faith, learning to accept himself as a gay man, and estrangement from his extended family.

While living in Arkansas, Simon’s former boyfriend Thad, fresh from rehab, brings Simon’s belongings from Hollywood. Simon and Thad rekindle their relationship. Simon wants to believe he has left his troubled past behind and that he can make a new life with Thad, but he will have to deal with the consequences of his past to move forward.