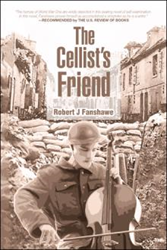 In Robert J Fanshawe’s new novel, “The Cellist’s Friend” (published by AuthorHouse UK), a soldier is executed for desertion. A cellist, he played his instrument and his firing squad sang a song before killing him. The novel illustrates redemption, racial prejudice and love during the first world war. The book is the first in a planned trilogy and is available for purchase at: https://www.amazon.com/CellistS-Friend-Robert-J-Fanshawe-ebook/dp/B07B5WVQ4Q.

The song the soldier plays, “Invictus,” is a kind of victory over death. While his friend, Ben, who attended his court martial and execution, knows that the charge of desertion was flawed, he failed to speak up at the trial and feels a terrible guilt and cowardice. He returns to the trenches but is wounded and is rescued by a Jamaican soldier. Ben writes to his rescuer’s wife, discovering that she has become a widow. They fall in love and she comes to England as he is released from hospital, though still carrying the permanent after-effects of his injury. However they have to face racial prejudice and the need to confront his friend’s parents’ terrible shame if he is to redeem his cowardice.

Although set during wartime, “The Cellist’s Friend” is different from other war stories in that it focuses on guilt rather than heroism. With his debut novel, Fanshawe wants to give readers them, “ability to see soldiers in a different way and to realize that relations between people from different races and countries is not just a modern phenomenon and could even be seen as nature’s way of refreshing humanity.”

Hollywood Book Reviews proclaims: “Author Robert J. Fanshawe has a way with words that will draw you in from the first paragraph - from the first sentence, actually. His hero, Benjamin Routledge, narrates this fascinating tale with a tone which is friendly and self-knowing, yet at the same time, a bit mysterious.”

About the Author
Robert J Fanshawe is an ex-British Royal Marines officer whose uncle was killed in the First World War. With a lifelong interest in the poetry and men involved in the war, he has written three plays. “The Cellist’s Friend” is the first of a trilogy of novels set in and after the war. Fanshawe also writes non-fiction and some poetry. He lives with his family in London and is also greatly interested in sport and the performing arts.