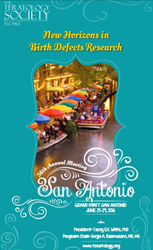 These abnormalities show an extreme brain disruption caused by the infection.

"Brazil is in shock,” according to Lavinia Schuler-Faccini, PhD, a Brazilian scientist on the front-lines of the Zika virus outbreak in South America where there are more than 1,000 confirmed cases of babies with microcephaly caused by their mothers contracting the virus during pregnancy. It’s a sentiment shared by researchers from around the world who are coming together to present the latest findings surrounding the mosquito and sexually-transmitted virus and its link to severe birth defects on June 29 at the Grand Hyatt San Antonio. The “special report” is part of the Teratology Society’s Annual Meeting of international birth defects researchers and is one of the most highly-anticipated sessions as reports of the Zika virus continue to rise in the United States.

“Zika is an urgent emerging health issue. There is still much we do not know about critical windows of susceptibility, mechanisms of action, and ways to mitigate risk,” said Tacey E. White, PhD, Teratology Society President. “As the premier source for cutting-edge research and authoritative information related to birth defects, our society is uniquely positioned to bring together clinical researchers and basic scientists to attack these issues from all sides.”

Dr. Schuler-Faccini, President of the Brazilian Society of Medical Genetics (Sociedade Brasileira de Genetica Medica), is lead author of one of the first ground-breaking studies to examine the link between the Zika virus in pregnant women and microcephaly (small head and brain) in their babies. She’s now focused on taking the research one step further by trying to describe the specific brain abnormalities of affected babies, as well as other associated defects, including neurological outcomes, joint abnormalities, and face characteristics. “These would help us better understand the underlying pathogenic mechanisms, as well as to clinically identify potential Zika-exposed babies of asymptomatic mothers,” she said. Dr. Schuler-Faccini plans to unveil new data on the spectrum of abnormalities observed in cases of proven maternal exposure to Zika virus, as well as possible pathogenic mechanisms. “These abnormalities show an extreme brain disruption caused by the infection,” she added.

Dr. Schuler-Faccini will join Sonja Rasmussen, MD, MS, Teratology Society Vice President and Director of the Division of Public Health Information Dissemination at the Centers for Disease Control and Prevention (CDC), for the Zika “Special Report” session on June 29 from 9:30a – 10:30a at the Grand Hyatt San Antonio. Dr. Rasmussen’s review in the New England Journal of Medicine earlier this year was the first publication concluding a causality between Zika virus infection during pregnancy and adverse birth outcomes.

With just weeks before U.S. travelers prepare to descend on Brazil for the Olympics, Dr. White hopes the collaboration of Zika researchers will stimulate much-needed research in order to stop Zika sooner rather than later. “My hope is that highlighting this research in a high quality scientific forum will motivate other researchers to get involved.”

About the Teratology Society

The Teratology Society is made up of over 700 members worldwide specializing in a variety of disciplines, including developmental biology and toxicology, reproduction and endocrinology, epidemiology, cell and molecular biology, nutritional biochemistry, and genetics as well as the clinical disciplines of prenatal medicine, pediatrics, obstetrics, neonatology, medical genetics, and teratogen risk counseling. Scientists interested in membership in the Teratology Society are encouraged to visit http://www.teratology.org.

More information on the annual meeting program may be found on the 56th Annual Meeting website.