North Korea Ski Resort Set to Open Within the Week

New Jersey based tour operator Uri Tours Inc. has confirmed that North Korea's new ski resort may open to the public as early as this week. 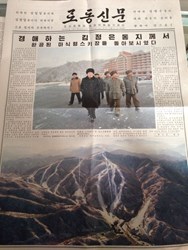 The ski resort is complete and could be open as early as January 3rd.

North Korea's new ski resort, officially called the Masik Pass Skiing Ground, may open its slopes to the public as early as this week according to Andrea Lee, CEO of Uri Tours Inc.

Ms. Lee said, "Our DPRK partners have confirmed that the ski resort is complete and could be open as early as January 3rd." She added that, "...The resort will have about eight runs open to the public and night skiing will also be available for the adventurous traveler."

Marshal Kim Jong Un's visit to the Masik Pass Skiing Ground was featured yesterday on the front page of Rodong Sinmun, a local North Korean newspaper. The article included photographs of the completed resort along with a chairlift and the completed hotel.

Ms. Lee added, "If you are bringing your own skis, it will cost about $20 to check them on Air Koryo from Beijing." Ms. Lee and Uri Tours will continue to update their website with the latest photos and information on the Masik Pass Skiing Grounds.