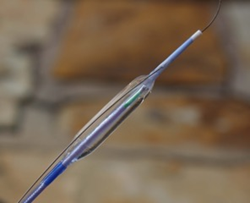 Symple Surgical Inc. (SSI) announced today that we have received a National Institutes of Health (NIH) Small Business Innovation Research (SBIR) Phase I Grant Award totaling $225,000.00. This award will leverage the ongoing R&D and commercialization initiatives with Duke University to pursue the integration of radiometric thermal feedback with the Symple Surgical microwave ablation technology. As part of this award, both parties will explore technological synergies and continue to strive toward pre-clinical evidence from SSI’s DirectAblate™ and GRIZZLY™ device platforms.

Daniel J. Kasprzyk, President & CEO commented: “We are very confident in the novel microwave ablation technology that has been developed at SSI with our talented and dedicated engineering team and technology partners at Duke University. We place enormous value on this strategic development partnership, which should rapidly advance our platform to achieve human clinical evidence. SSI has remained steadfast in our pursuit of next generation ablation technology to provide controlled circumferential ablation, thermal depth control, intimal/media vessel protection, and procedural ablation feedback built into a single device.”

Renal denervation is a minimally invasive vascular procedure used to treat uncontrolled hypertension that radiometric thermal feedback together with microwave ablation technology may offer several potential patient benefits over drug therapy. The market is predicted to grow significantly due to the surge in global hypertension rates. There are several approved, carefully designed clinical trials in the US, EU and Asia focused on moving the field of sympathetic nerve modulation forward.

Dr. Paolo Maccarini, Ph.D., observes: “Resistant Hypertension is a disease that has a global impact. Symple Surgical’s novel microwave ablation catheter is poised to be a unique therapy that can provide safe and effective treatment of this disease via a procedure called Renal Sympathetic Denervation. Together with my experience and research in the field of microwave radiometric techniques, I believe we can increase the efficacy of the procedure by providing real-time temperature feedback of the ablation zone. Symple Surgical has just been awarded a Phase 1 NIH SBIR grant to pursue this with my team at Duke University.”

All future research reported was supported by the National Heart, Lung and Blood Institute of the NIH under Award Number 1-R43-HL144416-01

Symple Surgical Inc products are currently not available for clinical evaluation or sale.