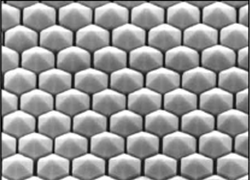 The company's green LED technology is expected to deliver an order-of-magnitude improvement in efficiency for micron-sized devices.

NS Nanotech, a new LED materials company, announced it met its first technical milestone with the demonstration of a nano-LED that promises to close the “green gap” in LEDs.

The new light emitting diode is based on patented technology enabling fabrication of components that will be smaller and draw far less power than current LED solutions, while emitting brighter, more saturated, more stable, and more directional green light. The demonstration unit will be unveiled at the virtual Display Week Conference and Exhibition sponsored by the Society for Information Display, starting Aug. 3.

“The $20-billion LED market is based on a 20th-century invention that still has several major shortfalls in cost and performance – shortfalls that NS Nanotech is working to overcome,” said Seth Coe-Sullivan, CEO and co-founder. “Initially, we are bridging the ‘green gap’ in LEDs that has drastically limited their use in markets ranging from large-scale outdoor signage to mobile displays. Ultimately, we intend to disrupt even larger emerging markets for multicolor micro-LED displays and UV LED solutions.”

Based on exclusively licensed patent portfolios from McGill University and the University of Michigan, NS Nanotech’s technology introduces new methods for growing nano-LEDs and their resulting structures. Coe-Sullivan said the company’s green LED technology is expected to deliver an order-of-magnitude improvement in efficiency for micron-sized devices, from today’s standard of less than 5% to more than 50% wall-plug efficiency (Wopt/Welec).

Coe-Sullivan said the company has achieved nano-LED performance of less than 5nm FWHM (full width at half maximum) emission spectrum, resulting in the most saturated and stable LED spectrum the industry has ever achieved. The performance compares more closely to laser technology than any other LED or quantum dot solution, he said.

The new technology promises to dramatically reduce the power required for high-resolution displays. “Imagine a mobile phone with a brighter and crisper display than you have ever seen, but which draws only half the power and lasts twice as long on a single charge as any of today’s smartphones,” said Professor Zetian Mi, co-founder of NS Nanotech and leader of the research team that developed the technology at McGill and University of Michigan.

The company intends to bring costs below the threshold required for integration of micro-LEDs into countless end products. NS Nanotech expects its green LED wafer will offer twice the efficiency performance of any other current solution. Further development will enable breakthroughs in cost and efficiency delivering performance equivalent to chips that today are ten times the size, for products such as micro-LED displays used in mobile phones.

NS Nanotech’s nano-LEDs will also be capable of delivering invisible ultraviolet-spectrum light that has been proven effective in water and air purification and sterilization of medical equipment. By delivering to UV LEDs the same breakthroughs in cost and performance that it delivers to multicolor micro LEDs, the company will be positioned to enable new classes of antiviral and anti-microbial purification solutions.

NS Nanotech closed its first round of seed funding in 2019 to focus on development of its patented nano-LED technology and completion of its green LED demonstration. Seth Coe-Sullivan, CEO, previously co-founded QD Vision, the quantum dot materials company whose technology eventually was integrated into Samsung’s QLED televisions; he is also the winner of the Brody Award for LCD performance improvements. Co-Founder Zetian Mi, Professor of Electrical Engineering and Computer Science at the University of Michigan, is a pioneer in nanostructure epitaxial growth. And Co-Founder Rick Bolander is Managing Partner of E-Lab Ventures and an investor with a long track record in launching successful materials companies. The company’s platform technology is poised to deliver breakthroughs in a wide variety of applications, starting with micro-LED displays, and extending to applications in health, energy efficiency, and sanitation.