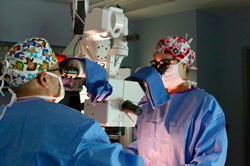 I want other women to know there is a light at the end of the breast cancer tunnel. Choosing to have breast reconstruction was the best thing I’ve done for myself both physically and mentally.

After being diagnosed with breast cancer at 36 years old, Cynthia chose to undergo a double mastectomy.

“Because I also had a strong family history of breast cancer on my dad’s side, I had both breasts removed to reduce my risk of developing cancer again in the future,” Cynthia shares.

Radiation was recommended as part of her cancer treatment, so Cynthia chose not to have breast reconstruction at the time of her breast cancer surgery. Following her mastectomy, Cynthia experienced numbness in her chest. Numbness following mastectomy is extremely common and is caused by nerves that supply feeling to the chest being cut when the surgeon removes the breast tissue. Unfortunately, many patients will end up losing most if not all their breast sensation because of the mastectomy.

About a year after having her breast removed, Cynthia was finally ready for reconstruction.

Initially she consulted with a local plastic surgeon who informed her of her reconstructive options. She was told that because of her prior radiation, breast reconstruction would likely be unsuccessful. It wasn’t until her radiation oncologist encouraged her to get a second option from the surgeons at PRMA Plastic Surgery that she felt hopeful.

“After my mastectomy and hysterectomy, I felt like everything that defined me as a woman was gone,” explains Cynthia. “I feared I would always feel deformed. Dr. Ledoux gave me hope that I would be able to achieve my desired results though DIEP flap reconstruction.”

In December of 2018, Cynthia underwent DIEP flap breast reconstruction surgery. This procedure does not depend on implants to recreate a breast. Instead, it uses the patient’s own tissue from the lower abdomen to restore a warm, soft, natural breast after a mastectomy. Unlike the TRAM flap that also utilizes lower abdominal tissue, the DIEP flap preserves all the patient’s abdominal muscles. Sparing the abdominal muscles makes recovery much easier and significantly decreases the risk of abdominal complications, like bulging or a hernia.

“When I first saw my new breasts after surgery, I was immediately relieved,” she says. “They looked like real breasts!”
About six months after the initial surgery, her newly reconstructed breasts also began to truly “feel” like natural breasts.
During the DIEP surgery, PRMA surgeons perform an extra procedure known as sensory nerve reconstruction. This repairs the nerves cut by the mastectomy and significantly improves return of feeling to the reconstructed breast.

“At first, it felt like a tingling sensation…kind of like when your foot falls asleep. But eventually the tingling subsided and now my reconstructed breasts feel almost the same as my natural breasts used to,” Cynthia shares. “I remember going into the office for my nipple reconstruction procedure…Dr. Ledoux was using a needle to inject a numbing medicine and I could feel the needle prick!”

“Cynthia’s experience is something we see regularly at PRMA,” shares PRMA co-founder Dr. Peter Ledoux. “The goal of breast reconstruction is to restore a sense of wholeness after breast cancer surgery, but we want to raise the bar. Restoring sensation in the breast is the next major frontier in breast reconstruction but unfortunately this has yet to be embraced by all plastic surgeons. We are proud to say we have been successfully performing sensory nerve reconstruction since the 1990’s!”

“I want other women to know there is a light at the end of the breast cancer tunnel. Choosing to have breast reconstruction was the best thing I’ve done for myself both physically and mentally,” Cynthia shares. “I hope that by sharing my experience, I can help others who find themselves in the same situation I faced.”

About PRMA
PRMA Plastic Surgery in San Antonio, Texas, specializes in state-of-the-art breast reconstruction. Procedures offered include the DIEP flap, SIEA flap, thigh flaps, buttock flap, sensory nerve reconstruction, fat grafting, vascularized lymph node transfer and nipple-sparing mastectomy. PRMA is In-Network for most US insurance plans and routinely welcomes patients from across and outside the US.

Our Mission
We are dedicated to promoting an environment of compassion, concern and support for every patient regardless of social or economic status and regardless of type of insurance. We will strive to not only support the patient and their family but also to support each other as the ever-changing field of medicine becomes more complex. Honesty and integrity, compassion and caring, make up the foundation of PRMA and at no point shall these principles be compromised