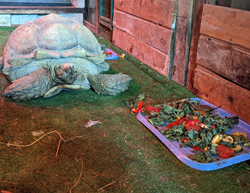 Sulcata tortoise at the shutdown Tri-State Zoological Park, sitting next to rotted food covered in bugs in the ‘Reptile House’

Animal welfare is one of our top priorities at the Zoo – both locally and globally.

Oakland Zoo staff made the long drive back to Oakland Sunday night with a dozen reptiles rescued from Tri-State Zoological Park in Cumberland, Maryland. These reptiles were a part of the People for the Ethical Treatment of Animals (PETA) five-day rescue operation – the group’s largest-ever rescue of animals from a roadside zoo which recovered over 60 animals of 30 different species. This follows the legal settlement with Tri-State Zoological Park, formerly operated by Robert Candy.

Oakland Zoo, along with 14 other reputable accredited zoos and sanctuaries, assisted in the removal, transport, and immediate care of the animals rescued – including reptiles, bears, exotic birds, coatimundis, and much more.

The facility had repeatedly failed to meet minimum federal standards for the care of animals established by the Animal Welfare Act (AWA). The animals were kept in abhorrent conditions. Living in small cages or enclosures, they received inadequate (if any) veterinary care and were left neglected, malnourished, and improperly cared for.

“We are incredibly grateful to our Zoo and sanctuary partners for helping us. If we didn’t have reputable Zoos, such as Oakland Zoo, these animals would have to stay with neglectful owners, like Bob Candy, where they would be mistreated for years”, says Brittany Peet, PETA Foundation’s General Counsel for Captive Animal Law Enforcement.

The Zoo transported a dozen reptiles cross-country to reputable sanctuaries like the Colorado Reptile Humane Society. The reptiles rescued include box turtles, a leopard tortoise, a yellow-legged tortoise, a Madagascar spiny-tailed iguana, a reticulated python, ball pythons, and a Russian tortoise.

On initial examination by PETA’s contracted veterinarians at the roadside Zoo, the reptiles were severely dehydrated, in poor body condition, and likely malnourished. PETA, along with the assistance of Oakland Zoo’s Animal Care, quickly administered fluids.

“Animal welfare is one of our top priorities at the Zoo – both locally and globally. Participation in these rescues, our involvement in creating and advocating for legislation is vital to combat the illegal wildlife pet trade*, which allows owners to exploit these animals.,” says Darren Minier, Director of Animal Welfare and Research at Oakland Zoo.

Two of the rescued tortoises, a yellow-footed and a leopard tortoise, have joined the Oakland Zoo family and are now being treated at, and quarantined, at the Oakland Zoo Veterinary Hospital.

There was no medical documentation for any of the animals that were rescued. The tortoises are now undergoing full medical examinations by the Zoo’s Veterinary Care staff to determine their current state of health. Due to the condition they were kept in at the Tri-State Zoological Park, it is likely they carry illnesses that will need to be immediately cared for.

The vast majority of Oakland Zoo’s animal residents are rescues, from both private ownership and the illegal wildlife trade. Animals confiscated by officials at San Francisco International Airport and the Port of Oakland have been brought to Oakland Zoo for treatment, care, and permanent sanctuary over the years. The Zoo has also worked with PETA for many years in different rescue operations and investigations of rescues.

*The illegal wildlife pet trade is the unlawful capture and selling of products derived from wild animals or plants determined to be unsustainable.

ABOUT OAKLAND ZOO AND THE CONSERVATION SOCIETY OF CALIFORNIA:
Oakland Zoo, home to more than 850 native and exotic animals, is managed by the Conservation Society of California (CSC); a non-profit organization leading an informed and inspired community in Taking Action for Wildlife locally and globally. With over 25 conservation partners and projects worldwide, the CSC is committed to conservation-based education and saving species and their habitats in the wild. Oakland Zoo is dedicated to the humane treatment of animals and is accredited by the Association of Zoos and Aquariums (AZA), the national organization that sets the highest standards for animal welfare for zoos and aquariums.