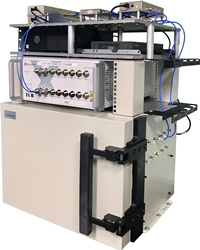 Triathlon is a critically important tool for the development of the new Wi-Fi 6 (11ax) equipment enabling engineers to observe hard-to-capture issues on the RF layer.

Triathlon is a critically important tool for the development of the new Wi-Fi 6 (11ax) equipment enabling engineers to observe hard-to-capture issues on the RF layer.

Often performance issues are easily seen at the MAC or TCP/UDP/IP layers by common sniffers, such as Wireshark, but when the root cause of these issues is at the RF layer, engineers have trouble identifying it.

Prior to Triathlon, the MAC and IP captures were not time-aligned with the RF measurements as disparate test tools were used to view them. It took a long time to manually search the unsynchronized traces from multiple instruments to find the root cause of poor performance.

Triathlon enables engineers to trigger the LitePoint IQxel-MW in real-time, synchronize the Wireshark captures with the RF measurements performed by the LitePoint PHY layer traffic analysis software and then click on problematic packets in the Wireshark captures to view the underlying RF measurements. This new capability saves months of development and helps engineers optimize the performance of the challenging new Wi-Fi 6 OFDMA technology.

“The Triathlon Wi-Fi analyzer eases the communication between different layers and disciplines. RF and PHY layer teams use ‘dBm’ and ‘dB’. MAC layer teams that speaks in ‘bits per second’. Triathlon can point to the RF & PHY layer root cause of issues observed at the MAC layer or at the system level, which reduces the duration of integration cycles,” said Amit Zeevi, Senior Member of Technical Staff at Intel.

Operating OTA in the stable and repeatable environment of the octoBox personal testbed, Triathlon integrates the LitePoint IQxel-MW RF measurement system with octoScope’s Pal-6™ chipset-based instrument. The Pal-6 can trigger the LitePoint to capture events of interest in real-time, enabling detection of root cause at the RF layers.

The OFDMA technology used by Wi-Fi 6 is particularly challenging at the PHY and RF layers. For example, stations in an OFDMA link in order to transmit simultaneously without interfering with one another, must frequency-lock to within 350 Hz and equalize their signal as seen by the access point, all within a few microseconds. Prior to Wi-Fi 6, the RF issues could be tested separately from the higher layers because such time-critical RF requirements were uncommon, but with the fast lock requirements and multiple OFDMA stations potentially interfering with one another as they simultaneously transmit on the air, RF issues are at the root of most throughput problems and require a tool like Triathlon to deliver synchronized captures and ability to trigger RF measurements based on events of interest at the higher layers.

“With the dramatic increase in complexity of the Wi-Fi 6 PHY layer, a simple solution is required to detect and diagnose problems due to underlying RF issues,” says Adam Smith, Director of Product Marketing at LitePoint. “octoScope’s Triathon integrates the IQxel-MW configured with the IQsniffer traffic analysis software, enabling simultaneous analysis of both the protocol and RF signal while an issue is occurring. This results is much faster problem resolution.”

“Before Triathlon, engineers had to use a hit-or-miss trial-and-error approach to capture problematic RF transmissions, and they had to try to align separate RF and protocol captures by hand. Triathlon vastly speeds up their work by enabling programmable event-based triggering of LitePoint captures, and by automatically synchronizing the RF and protocol captures,” says Leigh Chinitz, octoScope’s CTO. “Engineers can program capture conditions using a common scripting language or select from a set of supplied trigger scripts.”

“With the addition of Triathlon, the octoBox personal testbed has acquired a new dimension into the RF layer testing, becoming a uniquely all-encompassing testbed for developing and optimizing challenging wireless technologies.” says Fanny Mlinarsky, President of octoScope.

About the octoBox personal wireless testbed

Stackable and configurable octoBox personal testbeds are completely isolated from external interference and can be used at an engineer’s office or lab bench.

Each octoBox testbed is controlled by a dedicated Node.js web server accessible via a browser UI for manual control or via REST API for test automation. The server controls the built-in instruments, traffic, test flow and DUT configuration and serves as the time base for the testbed. Test results are saved in a Mongo.DB database, enabling multiple teams to easily collaborate by sharing test results and test automation scripts.

octoScope is the market leader in isolated, repeatable and automated wireless personal testbeds. Our patented technology redefines the accuracy, stability, economics and value of over-the-air wireless testing. The octoBox testbed is configurable for automated regression test sequences with a range of airlink conditions and interference scenarios. The octoBox testbeds are scalable to support a single DUT or multi-node mesh systems under test. The testbeds feature powerful technologies, such as test traffic generation, monitoring, motion emulation, interference generation and device emulation, essentially all the elements required to evaluate the behavior and performance of a broad range of wireless devices and systems.

See what our customers say about the octoBox.