One Out of Four Teens Tweeted or Created a Facebook Post About the 2014 Sochi Winter Games Reports StageofLife.com in its Teen Trend Report on the Olympic Spirit 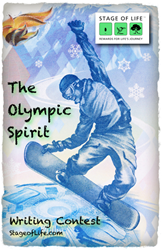 16.5% of teens followed an Olympic athlete on Twitter during the 2014 Sochi Winter Games.

To understand how today’s teenagers interacted with the 2014 Sochi Winter Games, StageofLife.com, an international, multi-generational writing community, asked high school and college students questions about the Olympic Spirit as part of its monthly writing contests and life surveys.

The results revealed the following statistics about teenagers and the Olympics:

--Figure Skating, Snowboarding and Ice Hockey ranked #1, #2, and #3 respectively as the most watched Winter Olympic events on TV by teenagers out of 13 different events provided. The Nordic Combined event ranked last, with less than 1% of teens tuning in to watch.

--92.2% of teenagers say they are motivated by competition.

--34% of students selected the "Spirit of International Unity" as the most important symbolic meaning for the Olympics. Other choices included Spirit of Champions (12.5%), Spirit of History and Tradition (4.4%), Spirit of Inspiration (32.4%), and Spirit of Competition (16.8%). Teens care more about the international goodwill of the Olympic games over other arching themes, i.e. tradition.

--84.1% of young adults say they watched some of the Sochi Olympic Winter Games.

Over 5,300 students visited the essay and survey page during the Olympic writing prompt and hundreds fully answered the poll. An additional 120+ teen bloggers submitted an essay to StageofLife.com sharing their personal story and thoughts that answered the question, ”What does the Olympic Spirit mean to you?”

When Rebecca Thiegs, VP of Education for Stage of Life, asked about her inspiration behind writing, Eareckson responded, “Writing allows you to convey your thoughts and beliefs to everyone who reads your words. The potential power of words is limitless, and I believe that it is imperative that people learn how to properly use language to convey their stories to the world.”

Editors also selected a winner from its “Short Short Story” Twitter contest which tied into the monthly writing prompt about the Olympics. The winning Tweet came from @TJoyaArt who wrote, “So sweet a sound assists elegant figures removing doubt, pulling humanity back into unity, for Olympians we shout #figureskate”

To read all of the essays and download the full teen statistics report on this and other monthly writing contests and teen trends, visit StageofLife.com.

StageofLife.com is a privately funded, start-up company founded in 2009 by Joe and Eric Thiegs. The website's mission is to change the world, one story at a time. The site welcomed its 1,000,000th visitor last year and provides an international writing community for today's teen, Gen X, Gen Y, and Baby Boomer generations.

Mobile Storytelling Website - StageofLife.comPeople can now share their life experiences with the world directly from their smart phones