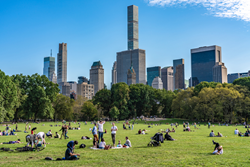 Despite some concerns over city living early in the pandemic, Americans rediscovered their love of living in big cities like New York where they created families of choice—people with similar mindsets and values.

A new national poll says that’s changing. According to an Omnitrak online survey with a nationally representative sample of 25,700 Americans, New York City ranks as the #1 city Americans want to move to and #1 in terms of pride of place.

“For two years, Covid caused Americans to re-think big issues like where they live,” said Pat Loui, Omnitrak Chair and CEO. “Despite some concerns over city living early in the pandemic, Americans rediscovered their love of living in big cities like New York where they created families of choice—people with similar mindsets and values. In fact, 6 of 7 Americans would consider moving to the Top 50 metro areas, which explains why NYC’s softening demand at the start of Covid is roaring back, up more than 25 percent, per the National Realtors Association and Yahoo Finance. Interest in other Sunbelt metro areas like Nashville and Austin also drove record median home prices in those cities.”

Omnitrak, a survey company specializing in tourism, resident sentiment and city pride, conducts research for Orlando, Houston, San Diego, Honolulu, and other destinations, launched its first Pride of Place poll in the fourth quarter of 2021 and found the following surprising results:

Chris Kam, President and COO of Omnitrak said, “This new phase has cities examining what will make their metro areas more appealing to the resident they want to attract and the culture to reinforce. Leadership aims to monetize 2022 into a stable and growing community. It’s creating a genuine atmosphere of wellness and therefore attracting many levels of prosperity and balance.

MOBILITY MADE A FRIEND ALONG THE WAY…Who Let the Dog Out?
WFH created Pawternity–the odd new term for time off from work spent with a home-alone pup. Pandemic lack of human love meant pent-up pet love demand that resulted in stress on vets, dog walkers, and rising Petco sales, pet food scarcity, along with fears of what would happen once people returned to work, went out more frequently, or left on vacation.

People considered Pet Tinder and 2021 was declared the height of pet abandonment by Animal Shelters.

“Metropolitan lifers love pets even as the crowds return,” Omnitrak’s Kam said. Top cities for pets are Omaha, Baltimore, Louisville, Atlanta, Chicago and New York City. I see this as a continuing trend as infections and new Covid variants are still fresh concerns. People are relying on the stability of pet companionship.”

Other Omnitrak top 2022 predictions for city slickers are:
1. Heightened and continued voluntary use of masks and anti-bacterial wipes
2. Activism for political sustainability awareness and environmental practices
3. WFH productivity combines with office interaction
4. Streaming entertainment and adult online learning
5. More fresh-air fiends learning to enjoy their own backyards
6. Initial resistance to business travel, leveling up to important group meetings as Zoom meetings continue
7. Women in business support of other women in business (even as competitors)
8. Business casual becomes acceptable office style
9. Return of nightlife at restaurant and bars
10. First-responder jobs are desirable and more lucrative

Ask us about these topics from our City Pride Research and give us questions you’d like us to ask in future research:
1. Why City Life Again? What changed? Which cities attracting the brightest and most talented?
2. Why certain cities are tops on the list
3. Profile of the mobile individuals
4. More on pets
5. Digging deep into the Top Ten City Pride trends predictions
6. Who to talk to in Houston on wooing desirable new residents
7. Pandemic effects and analysis on mobility
8. Quotes from the survey that are stirring and specific; quirky, moving or thoughtful.

About Omnitrak
Omnitrak, founded in Honolulu, Hawaii in 1981, is a leading strategic research firm with a strong presence in the consumer, travel and retail sectors in North America and Asia. Omnitrak works with some of North America’s largest state tourism offices, which subscribe to the company’s TraveltrakAmerica™ monthly tracking study of U.S. trips. The company serves a broad array of public- and private-sector clients, helping to grow their markets, develop new products and increase brand loyalty. For more information, visit http://www.omnitrakgroup.com.