Tickets are on sale now for One Direction Tour 2014 at Doremitickets.com. Save up to $100 with coupon code "save." 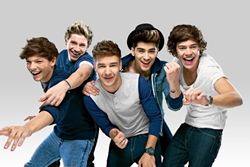 Based in the UK, the five young men in One Direction have been winning over the hearts of American teenage girls for the last few years. Now, the band is taking their talents across the pond to North America for an epic tour starting in August 2014. Known for their boyish good locks and exceptionally talented voices, One Direction will be playing in both Canada and the United States to promote the release of their newest and most successful albums.

One Direction will be wowing their fans in the Midwest with epic performances. Next, on August 29 and 30, One Direction is scheduled to play in front of more than 40,000 fans at Soldier Field in Chicago, IL. Tickets for One Direction are in hot demand and are expected to sell quickly. Consequently, it is important that you do not wait for the last minute and give the Christmas gift of a lifetime by surprising a One Direction fan with tickets to a concert venue near them.