OnRad.io, A New Company Brings Search Engine to Online Radio, Brings Listeners to Their Sought-After-Songs in the Exact Moment it Airs

OnRad.io Find the Songs and enables Sharing on any Messaging Platform 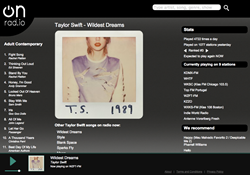 Because Google doesn't index online radio streams, radio is invisible to searchers and radio companies are missing out on more than 100 million users per day

The new search technology tracks free online radio stations every second and determines what songs are being played at that exact moment. This technology opens up a vast library of popular songs, all of which can be searched, found and played in real time.

"Because Google doesn't index online radio streams, radio is invisible to searchers and radio companies are missing out on more than 100 million users per day,” says Chief Executive Officer of OnRad.io, Michael Robertson. "Our goal at OnRad.io is to make it one-click easy to find any song playing on the radio and to easily share those songs with friends, this ultimately drives more listeners to the great content on radio.”

OnRad.io introduces three significant advancements for online radio.
Search and Play any Song Playing Anywhere in the World on Radio: Music fans can use OnRad.io to find songs or artists from free stations from around the world. Mobile users can use free Android or iOS apps while desktop users can use OnRad.io via a browser. Searches scan about 100,000 stations in under 100ms looking for matching songs. For songs available on multiple stations, the station nearest the beginning of the song will be suggested to users first. To hear a song, users connect directly to the broadcasting station where they'll hear whatever material is broadcast.

Song Sharing in any Messaging App:Using OnRad.io music lovers can share songs in any messaging app including Snapchat, WeChat, Twitter, Gmail, WhatsApp and others. To send a song users simply construct an OnRad.io URL appending either a song or artist name to the URL and send it to another user. A smart algorithm detects whether the link is a song or artist name, even if it is a partial name.

When the recipient clicks the received URL, the free OnRad.io app will open and play the desired song or artist. If the song is not immediately available anywhere on radio, the user is notified when the song is expected to play on radio. A notification will be sent to the user when the song starts and they can tune to that station if they desire.
See Video Demo of Song Sharing in Snapchat: bit.ly/onradiovideo

Every song now has a freely accessible web page with Listening and Statistics: A web page has been constructed for every song played on radio. These web pages make it easy to listen to the song either immediately or to be notified the next time it’s broadcast anywhere on radio. Statistics are displayed showing song popularity, the stations that play the song and when the song is expected to play on radio. Anyone can access these URLs to listen with no subscription fee, login or registration required. To listen, users are connected directly to broadcasters playing the song.

Benefits to Radio Companies And Artists
OnRad.io benefits radio companies and artists. Artists get paid for every radio listen of their songs. OnRad.io helps artists get their songs heard on radio which leads to higher royalty payments. Online radio companies can expect a significant influx of customers who will find their station and heart their songs as well as the programmed audio advertising, as expected on traditional radio. For the first time, online radio stations can receive direct search traffic to their station. This will help them garner more listeners and better compete with Pandora.

To experience OnRad.io users can go to OnRad.io from their computers or smartphone. Using mobile phones, they'll be invited to install the free OnRad.io app. Those on desktop computers will get a web based experience.

About OnRad.io
OnRad.io is a search engine company to help music lovers find the ideal online radio station by giving them up-to-the second accuracy about what every station is playing in real time. Artists get paid when people listen to their songs on the radio so support your favorite artist and online radio by using OnRad.io. Digital music pioneer Michael Robertson leads the OnRad.io team. Robertson is best known as the founder and former CEO of MP3.com. Other companies founded by him include desktop Linux company Linspire and VOIP company Gizmo5, which sold to Google.