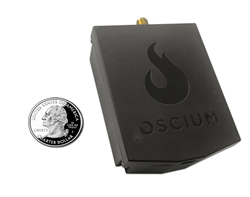 We work hard to ensure we are under-promising and over-delivering value to the marketplace.

The WiPry 2500x is the 5th generation of the award-winning WiPry product line, and it improves on an already impressive legacy of innovation and recognition. Since the first WiPry was released in Sept 2011, the product line has won the following major awards: 2016 ACE Award Winner, 2015 R&D 100 Finalist, 2015 ECN Impact Finalist, 2012 Frost & Sullivan Best Practices Award Winner.

Matt Lee, Co-Founder & CTO of Oscium, said, “We work hard to ensure we are under-promising and over-delivering value to the marketplace.” Here are some examples of how the WiPry 2500x delivers exceptional value:

On the hardware side, the WiPry 2500x is slightly larger than previous versions but still small enough to compare to a quarter. Additional space was added to allow for external charging (4 AAA alkaline batteries). This provides full functionality for newer iOS devices including SSID’s.

On the software side, significant improvements have been made including:

One of the benefits of these software improvements is that there is no software subscription charge. Software is free of charge and available through the user's preferred platform: iOS, Android, PC, and / or Mac.

Oscium’s WiPry 2500x accessory connects to the host device. Then, the WiPry software is downloaded transforming it into a perfectly portable Wi-Fi troubleshooting tool.

Availability
WiPry 2500x hardware can be pre-ordered today for $649.97. Orders ship April 30, 2019. Visit us at oscium.com to purchase or for more information.

WiPry software is free both in the Apple App Store and on Google Play as well as on the PC and Mac. Compatible devices as of this press release are listed by operating system:

About Oscium
Oscium delivers innovative test equipment accessories that connect to a smartphone or tablet transforming the host device into a portable troubleshooting tool for field technicians. Hardware can be purchased from Oscium and free software apps are downloaded on either Google Play or in the Apple App Store. Oscium has been delighting customers since 2010 and currently offers the following products for purchase: iMSO-204x (handheld oscilloscopes) and WiPry 2500x [WiFi Spectrum Analyzer (2.4 & 5 GHz) with Cross Platform Support].

The Future of Test Equipment is Here