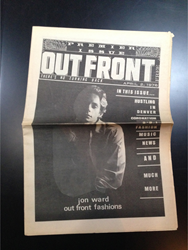 OUT FRONT and its parent company, Q Publishing, have brought a lawsuit against Maryland corporation Outfront Media Inc (OMI). The case has been filed in the United States District Court for the District of Colorado (Civil Action No. 15-cv-00311-JLK). The complaint alleges unfair competition, deceptive trade practices, and misappropriation under Colorado common law.

As noted in court documents, in 2014 OMI (then CBS Outdoor) separated from the CBS consolidated tax group and rebranded as Outfront Media Inc in November of that year. The documents further note that Q Publishing has operated OUT FRONT continuously since 1976.

According to court documents, OMI’s use of the name in connection with advertising space, such as billboards and transit sites, has caused consumer confusion, allegedly damaging OUT FRONT as the company generates revenue through selling advertising space in print and electronic media.

Today, OUT FRONT reaches approximately 76,000 readers with more than 200 drop off points. The publication is distributed in Colorado as well as Utah, New York, Wyoming, New Jersey, California, Pennsylvania, and Washington, D.C.

For more information about OUT FRONT, please visit http://outfrontonline.com/.

About OUT FRONT
OUT FRONT was founded in 1976 by Phil Price. Price outlined his mission in the first issue of the publication: “OUT FRONT will cater to the needs and desires of gays in the area and will feature articles, thought-provoking editorial, the latest news and exciting photography.”

Price passed away in 1993 and left the company in the hands of Jay Klein and Greg Montoya, who carried on his vision until 2012. In late January, Colorado native Jerry Cunningham and his partner, JC McDonald, acquired OUT FRONT and its parent company, Q Publishing.

OUT FRONT remains one of the nation’s oldest continuously running, independently owned and operated LGBT media companies. And with that honor comes pride and gratitude, as well as responsibility.

Official Lawsuit ComplaintThe case has been filed in the United States District Court for the District of Colorado (Civil Action No. 15-cv-00311-JLK).