Team Fastrax™ will be performing their parachute pyrotechnic show and aerobatic demonstration as part of The City of Ocean City Airshow. 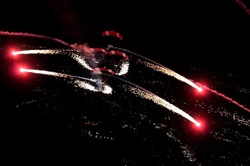 On Sept. 14 and 15, 2019, spectators will gather for The City of Ocean City Aerobatic Airshow that’s viewable from the Boardwalk. Fans will be amazed at the show in the sky.

“We are honored to be performing at The City of Ocean City Boardwalk Airshow,” commented John Hart, owner of Start Skydiving, and Founder of Team Fastrax™. “We are excited to tandem jump with Chief of Police Prettyman. We can’t wait for the opportunity to not only wow the crowd but to also mingle with fellow aviation enthusiasts afterward.”

On, Saturday, Sept. 14 there will be a pyrotechnic parachute show beginning promptly at 8 p.m. The performance consists of six highly trained and specially licensed Team Fastrax™ demonstrators above The City of Ocean City’s Beach and Boardwalk. The spectators will see a dazzling display of brilliant white and multi-colored projectile pyrotechnics ignited while flying in formation.

On Sunday, Sept. 15, the Boardwalk Aerobatic Airshow will feature some of the best stunt pilots and aerobatic champions in the world, along with military aircraft demonstrations. Several Team Fastrax™ members will jump with smoke, massive American flags and tandem jump with Chief of Police Prettyman.

ABOUT TEAM FASTRAX™
Team Fastrax™, sponsored by SELECTiON.COM®, is the most ambitious professional skydiving team in the world. The team has a roster of more than 29 active members, with a collective of more than 300,000 skydives. Team Fastrax™ has performed exhibition skydives all over the world for audiences large and small as a patriotic display or as product promotion.