With so much focus on denominations today, the author hopes to bridge the gap between those who claim a specific denomination and those who identify as nondenominational. 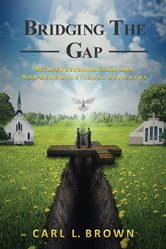 With the lack of moral stability in our nation today, the church’s voice is almost obsolete

“With the lack of moral stability in our nation today, the church’s voice is almost obsolete, but when it unifies, its voice will once again have impact,” says Brown

Brother Carol Brown have been saved and Spirit filled for over 42 years. He has been in ministry for 40 years, having pastored four churches. He been host to media ministry via radio, recorded, and live television programming. Currently speaks to a worldwide audience. He’s volunteered as a panel member of The Message of The Cross Program and Frances & Friends Program. He’s been a part of the Sonlife Broadcasting Network at Jimmy Swaggart Ministries and a speaker at Camp Meeting over SBN. He was an Area Manager for Promise Keepers in Louisiana from 1996 to 1999.

Xulon Press, a division of Salem Media Group, is the world’s largest Christian self-publisher, with more than 12,000 titles published to date, Bridging the Gap Between Denominational and Nondenominational Believers is available online through xulonpress.com/bookstore, amazon.com, and barnesandnoble.com.