The Pat Tillman Foundation (PTF) will honor honor Fawzia Koofi and the Tillman Scholars behind Digital Dunkirk at its 2021 Tillman Honors Awards Ceremony on Thursday, Nov. 4. 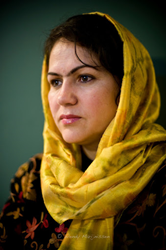 “It is our honor to call Fawzia Koofi our Champion and support her efforts to ensure that Afghan girls can freely attend school, that women can participate in all facets of public life, and all Afghans can someday live in peace.” says Marie Tillman, Board Chair and co-founder of PTF.

The Pat Tillman Foundation (PTF) will honor Afghan politician and women’s rights activist Fawzia Koofi and the Tillman Scholars behind the effort to evacuate Afghan allies, known as Digital Dunkirk, for their remarkable leadership and commitment to service at Tillman Honors in Chicago on Thursday, Nov. 4 from 12:30 to 1:30 p.m. CST. The event will also be livestreamed via YouTube Live at TillmanHonors.com.

Tillman Honors, presented by the NFL and sponsored by TEKsystems, celebrates Pat Tillman’s legacy by honoring those who exemplify his fortitude and spirit of service, and who have carried that legacy forward through their civic contributions. The annual event includes the presentation of the Champion and Make Your Mark Awards and showcases the global impact of Tillman Scholars as the next generation of leaders committed to service beyond self.

This year’s event brings together hundreds of Tillman Scholars and supporters from around the country to present the 2021 Champion Award to Afghan politician and activist Fawzia Koofi for her tireless advocacy for peace and women’s rights in Afghanistan and beyond. Koofi was the first girl in her family to go to school and the first woman to serve as deputy speaker of Afghanistan’s parliament; she was also one of four women to serve on peace negotiations between the Taliban, the U.S., and the Afghan government. She opened a home school for girls deprived of education during the Taliban’s first regime and has survived multiple assassination attempts for her work advocating for women and girls in Afghanistan to live lives with opportunity and free from violence.

“While Fawzia’s personal accomplishments as a politician and activist on the global stage are considerable, it’s the work she has done, and continues to do at great personal risk, that most inspires us,” says Marie Tillman, Board Chair and co-founder of PTF. “It is our honor to call her our Champion and support her efforts to ensure that Afghan girls can freely attend school, that women can participate in all facets of public life, and all Afghans can someday live in peace.”

The foundation will also give out the Make Your Mark Award, which is presented to Tillman Scholars for exemplifying Pat’s values of service, humble leadership and impact. This year’s honors go to the dozens of Tillman Scholars who participated in the evacuation and resettlement of Afghan allies after the fall of Kabul, in an effort that became known as Digital Dunkirk. Tillman Scholars Kate Hoit, Junaid Lughmani, and Rick Schumacher will accept on behalf of the group.

“The war in Afghanistan touches the lives of nearly all our scholars — many of them served there, and many saw family and friends sacrifice so much in pursuit of peace and justice,” says Dan Futrell, CEO and 2011 Tillman Scholar. “As U.S. forces left Afghanistan and the situation on the ground became precarious for interpreters and allies, they turned to the best resource they knew: each other. Through an informal network built among scholars, NGO and government contacts, and caring citizens, they helped evacuate and resettle hundreds of allies from Afghanistan, and continue to work to support our allies, friends, and family who remain in country or need support as they establish themselves in new surroundings.”

If you are a member of the media who wishes to arrange an interview regarding Tillman Honors, please contact Stephanie Kuenn at (773) 495-8278 or skuenn@pattillmanfoundation.org.

Fawzia Koofi is an Afghan politician and women's rights activist. Originally from Badakhshan province, Koofi was one of the few women included in the Afghan delegation negotiating peace with the Taliban. She is an ex-member of Parliament in Kabul and was the vice president of the National Assembly. She is also the author of “The Favored Daughter: One Woman’s Fight to Lead Afghanistan into the Future.” She escaped house arrest by the Taliban as the last U.S. plane left Kabul and continues to advocate from outside Afghanistan for women and girls in her country to retain the rights they earned back after the Taliban fell in 2000.

About Digital Dunkirk
In August 2021, a voluntary, grassroots coalition of individuals and organizations banded together to assist in evacuating Afghan allies who found their lives in danger as the Taliban took control of Afghanistan. Dubbed “Digital Dunkirk” after the civilian boats that helped the Royal Navy evacuate troops in World War II, these groups operated independently of the military to assist and support Afghans who provided invaluable help in the fight for peace and stability. Dozens of Tillman Scholars participated and led efforts in the evacuation and continue to assist allies who remain in Afghanistan and support refugees and families as they resettle around the globe.