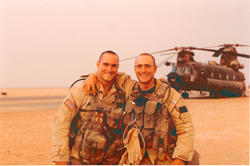 Tillman Military Scholars are awarded in honor of former NFL player Pat Tillman (left), who was killed in April 2004 in Afghanistan serving with the U.S. Army's 75th Ranger Regiment.

"Through our mission, we are proud to support and empower these outstanding leaders as they pursue their educational goals and strive to impact significant, positive change for our country and communities after their military service."

Marie Tillman, President and Co-Founder of the Pat Tillman Foundation, today announced the names of the 59 U.S. service members, veterans and military spouses chosen as 2014 Tillman Military Scholars. In recognition of their service, leadership and academic excellence, the newly selected class will receive $1.4 million in scholarships to pursue their higher education and continue their service in the fields of medicine, law, business, government, education, technology and the arts. After an extensive selection process, the scholars named were chosen from over 7,500 interested applicants, and they will represent 39 Universities and colleges nationwide.

“The Tillman Military Scholarship is not a gift; it is an investment in excellence and potential,” said Marie Tillman, President and Co-Founder of the Pat Tillman Foundation. “Pat lived his life with a passion for learning and action – he didn’t sit on the sidelines. The Tillman Military Scholars selected embody the same ideals that he lived by every day. Through our mission, we are proud to support and empower these outstanding leaders as they pursue their educational goals and strive to impact significant, positive change for our country and communities after their military service.”

For the full list of 2014 Tillman Military Scholars, with the service branches from which they were chosen, their American Universities or colleges, and their fields of study, visit: http://www.pattillmanfoundation.org/sixthclass.

Founded in 2008, the Tillman Military Scholars program supports our nation’s active-duty service members, veterans and military spouses by investing in their higher education. The scholarship covers direct study-related expenses, including tuition and fees, books and living stipend, for scholars who are pursuing undergraduate, graduate or post-graduate degrees as a full-time student at a public or private, U.S.-based accredited institution. To date, the Pat Tillman Foundation has invested over $10 million in educational support and scholarships, benefiting 350 Tillman Military Scholars at more than 98 academic institutions nationwide.

In June, the Pat Tillman Foundation will host the 5th Annual Pat Tillman Leadership Summit, bringing together Tillman Military Scholars with industry, non-profit and community leaders for three days of thought-provoking keynotes, panel discussions, and workshops focused on collaborative impact and service for our country and communities. The Summit will convene at Roosevelt University in Chicago from June 26-29, 2014. Media are highly encouraged to attend for interviews with Tillman Military Scholars. For press credentials, please RSVP to mmccarthy(at)pattillmanfoundation(dot)org.

If you are a member of the media who wishes to arrange an interview with Pat Tillman Foundation President and Co-Founder Marie Tillman or a 2014 Tillman Military Scholar, please contact Michelle McCarthy at (201) 675-1063 or mmccarthy(at)pattillmanfoundation(dot)org.

About the Pat Tillman Foundation