“Dodo The Donkey” from Christian Faith Publishing author Paul Little is a charming kid’s tale that shares the story of Dodo, a donkey who wishes his name was something else when one fine Sunday morning, his life changes. 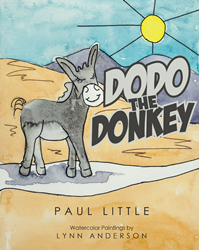 “Dodo The Donkey”: a wonderfully illustrated children’s story about Dodo the Donkey as he comes across a life-changing day that brings him to new experiences and surprises. “Dodo The Donkey” is the creation of published author Paul Little, a professor of Theatre Arts with a Ph.D. degree from Syracuse University, a DD from the American Baptist Seminary of the West, and a certificate in directing from the Royal Academy of Dramatic Arts in London. Later, he became chair of the Theatre Arts Department at the University of Redlands, where he remained until he became the dean of Fine and Performing Arts at Cypress College.

Little shares, “What’s in a name? If you could, would you have someone change yours? Dodo didn’t like his name. Deep down inside, Dodo wished his name was something else. He had a favorite secret name, but he was just old Dodo—until that Sunday! Then on that not-so-different Sunday morning, everything in Dodo’s life was about to change, including that name. He wasn’t really ready for what was about to happen to him. Life on the farm was pretty routine. The only people Dodo ever gave rides to were the local kids and then only on holidays. Watch out, Dodo, change is about to come your way!”

Published by Christian Faith Publishing, Paul Little’s new book is a brief yet touching read for children that will move their hearts as Dodo meets someone who makes him smile as He gives him something he long wished to have. This children’s tale is fun and entertaining as it tells a precious story that kids will enjoy as they flip over these water-colored pages.

View a synopsis of “Dodo The Donkey” on YouTube.

Consumers can purchase “Dodo The Donkey” at traditional brick & mortar bookstores, or online at Amazon.com, Apple iTunes store, or Barnes and Noble.

For additional information or inquiries about “Dodo The Donkey,” contact the Christian Faith Publishing media department at 866-554-0919.