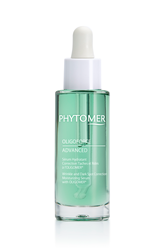 This next-generation daily treatment combines the comfort of an oil and the effectiveness of a serum. Its micro-emulsion texture concentrates powerful marine actives that, thanks to the formulation expertise taken from the pharmaceutical world, can be absorbed quickly and deeply into the skin.

Eternal Marine is an extract from an ancient blue microalgae that has survived because of its ability to adapt and thrive in extreme living conditions. This algae has an advanced defense system, namely the ability to produce a powerful anti-oxidant molecule that is also found in the skin, Thioredoxin. When Eternal Marine is applied to the skin it significantly activates the skin’s natural production of Thioredoxin which provides comprehensive protective and reparative properties for many cells and functions in the skin. In addition to its anti-oxidant effects, Eternal Marine smooths wrinkles by preserving the integrity and accelerating the production of collagen and elastin, by improving the supply of vitamin C to the skin and increasing the number of collagen producing cells in the skin. Eternal Marine also offers complete protection from inflammation which reduces hyperpigmentation in the skin for an even, illuminated complexion.

Directions for use: Massage a few drops into the skin alone or before moisturizers and masks, carefully avoiding the eye contour area.