Coming this summer, BROADWAY THEATRE STUDIO, producers of the long-running IMBIBLE series of Off-Broadway musicals, will produce its first VIRTUAL THEATRE FESTIVAL to present new works created specifically for live-online performance (https://vtf.live). BTS has partnered with theatre media icon PLAYBILL to host the festival, which will run exclusively on Playbill.com in August. BETERRIFIC, industry leaders in live-streaming productions, will provide the cutting-edge technology and experience necessary to successfully translate the live theatre experience to live-online. PLAYBILL VTF LIVE will award two $1,500 cash prizes, one to a festival winner chosen by a panel of judges and the second to an Audience Choice winner voted on by festival viewers. Submissions are currently open on the festival website at VTF.LIVE/SUBMIT, and virtual tickets will be available in the coming weeks. 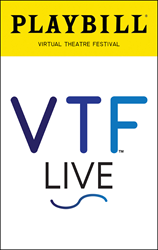 “We have our roots in theatre festivals,” says Executive Producer Anthony Caporale. “THE IMBIBLE: A SPIRITED HISTORY OF DRINKING opened at the New York International Fringe Festival in 2014 for what was supposed to be five performances, and that launched our company into a six-year run with over 1,500 performances of four different shows.” Artistic Director Nicole DiMattei adds, “We feel very close to festival theatre, and creating a new festival platform is a labor of love for us.”

PLAYBILL VTF LIVE encourages theatre artists to think outside the black box and develop new forms of live theatre that can be experienced simultaneously with other audience members, regardless of physical location or proximity. “While audiences remain unable to come to the theatre, Playbill is determined to bring theatre to audiences,” says Alex Birsh, Playbill’s Vice President and Chief Digital Officer. "This exciting new festival is a perfect fit for our new digital programing, and we’re eager to see what you come up with!" Shows selected to participate will be performed in real time during the festival broadcast, and entrants are encouraged to create works that fully embrace and showcase the live aspect of their productions, as well as the value of shared events. “Playbill VTF Live will bring people together in a new and exciting way,” notes BeTerrific CEO Michael Artsis. “We are proud to be leading the charge technologically, and we look forward to pushing the limits to make this a magical experience.” Broadway Theatre Studio is assembling a distinguished panel of judges to choose a winning production, and there will also be an Audience Choice winner selected by festival attendees. Each winner will receive a $1,500 cash prize.

“No one is sure what theatre will look like moving forward,” DiMattei observes, “but we do know it will look different.” PLAYBILL VTF LIVE is also certain that tomorrow’s theatre-makers will be instrumental in re-conceiving our art form, and discovering new tools, techniques, and experiences that we can’t even imagine today. “We see Playbill VTF Live as a way to crowdsource the solutions we need to speed theatre’s recovery, as well as a means to advance live performance in ways that will remain valuable and relevant afterward,” concludes Caporale. There is no cost to submit a show to PLAYBILL VTF LIVE, though if selected to participate there will be a $150 entry fee.

Theatre fans looking to attend the festival will be able to purchase an all-access festival pass for only $2.99, with $1 from each ticket going to a theatre advocacy charity partner.

Executive Producer Anthony Caporale is an award-winning producer in the online and live theatre worlds, internationally known for being the first to bring mixology to both YouTube, with his seminal web video series ART OF THE DRINK, and then to the New York stage with his groundbreaking Off-Broadway musical comedy series, THE IMBIBLE. There are few producers who combine such a long history of creating critically-acclaimed online video content with the experience of mounting a series of successful and long-running New York City theatre productions. He is the founder and Artistic Director of BROADWAY THEATRE STUDIO, as well as the creator and host of the award-winning BROADWAY BARTENDER series carried by Broadway World. Anthony has appeared in over 600 performances of THE IMBIBLE: A SPIRITED HISTORY OF DRINKING, regularly appears on national TV programs like The Chew, The Dr. Oz Show, and FOX Money, and wrote and directed the three other IMBIBLE shows:

BROADWAY THEATRE STUDIO is the producer of THE IMBIBLE series of Off-Broadway musicals. Now in their sixth year as some of the longest-running Off-Broadway shows in history, THE IMBIBLE musical comedies consistently receive rave reviews from both critics and guests alike. BTS began producing shows in NYC theatre festivals, and THE IMBIBLE: A SPIRITED HISTORY OF DRINKING originally premiered at the 2014 New York International Fringe Festival, where it sold out every performance and was encored for an extended run. Following this festival success, BTS opened the show Off-Broadway and has since added three additional long-running productions to THE IMBIBLE series.

PLAYBILL is the exclusive magazine for Broadway and Off-Broadway theatregoers, providing the information necessary for the understanding and enjoyment of each show, including features articles and columns by and about theatre personalities, entertainment, travel, fashion, dining and other editorial pieces geared to the lifestyle of the upscale, active theatre attendee. PLAYBILL also proudly serves New York's three most prominent performing arts venues: the Metropolitan Opera House, Lincoln Center (Avery Fisher Hall, Alice Tully Hall, New York State Theater), and Carnegie Hall. With over 2 million monthly unique visitors, Playbill.com is the preeminent site for theatre news and features, delivering high-quality content to audiences around the world.

BETERRIFIC media is delivered through devices and apps on Amazon Fire, AppleTV, Roku, Android TV, iOS, Android as well as directly on BeTerrific.com and other syndication outlets. They are a partner of Twitch.tv, where their programming can be seen on the front page. BETERRIFIC was founded by five-time Emmy Award-winning host, producer, journalist and director Michael Artsis and a team of award-winning journalists and video production specialists. The name "BeTerrific" pays homage to Michael’s grandfather Jerry, a WWII veteran of the 16th Camera Combat Unit who, whether healthy or ailing always said he was “terrific” when he chatted with people. He never gave up and always soldiered on.