Freshman Phenom Sends Inspiring Message to the World; “You’re Perfect Just the Way You Are.” 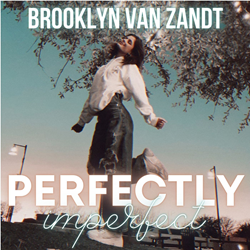 Today, independent singer-songwriter Brooklyn Van Zandt releases her new single, “Perfectly Imperfect,” written and composed by Brooklyn. As a high-school student, three-sport varsity athlete, professional model/actor, and social media influencer with millions of fans, Brooklyn knows all too well about the pressures that young people face. She explained that, while her other songs are written about her own experiences, “Perfectly Imperfect” is a strong, direct message to her fans; “You’re perfect just the way you are. If you’re different embrace it. If you’ve got a problem face it. If you’ve got a big dream, then chase it.”

Laying outside and relaxing with her guitar after live-streaming, Brooklyn was reflecting on all of the self-deprecating, negative comments that dominated her feed. While comments toward her were generally positive, she just couldn’t shake the negativity she observed; “I wish I was pretty,” “I wish I was smart,” “Nobody likes me.” She explained, “I’m so sick of seeing people tear each other apart in my comments section over the things that make us unique.” This inspired Brooklyn to send her audience a direct message of empowerment, acceptance, and positivity. With wisdom and confidence beyond her years Brooklyn wrote “Perfectly Imperfect;” quite literally a song for everyone.

“Perfectly Imperfect” is available now on all streaming platforms.

Listen to Perfectly Imperfect wherever you stream music.

About Brooklyn Van Zandt
Brooklyn Van Zandt is best known as a social media influencer, actress, model, and independent singer-songwriter who rose to fame after gaining over 9 million followers on social media apps including TikTok, Likee, Instagram, and others under the username HouseofBrooklyn. Represented by the Kim Dawson Agency Brooklyn has been featured in numerous retail print ads, SAG Screen Actor Guild (SAG) commercials, and is a member of the Broadcast Music Inc. (BMI).

Along with her parents, Jay and Misti Van Zandt, she has two older brothers, Austin and Ethan.