15 Years of Telling Stories and Changing Lives Around the World

François and his wife have six children and, although they can't afford to feed more children, they don't know that there are ways to prevent pregnancy. François' story is not uncommon, which is why the Population Media Center has been producing entertainment-education for communities all over the world for the past 15 years. 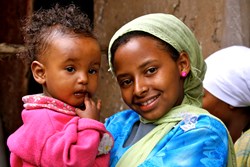 PMC photo of children in Ethiopia

My wife and I learned that there are ways to keep from having children. I am very happy now because of this program.

In Burkina Faso, François and his wife listen to a popular radio program, Yam Yankre (The Choice), when he gets home from work. François earns meager wages as a mason, which makes it hard to support his wife and six kids.

“Through Yam Yankre,” says François, “my wife and I learned that there are ways to keep from having children. I am very happy now because of this program.”

For 15 years, Population Media Center (PMC) has been reaching audiences around the globe through mass media. Burkina Faso, a country approximately the size of Colorado with a population of almost 16 million located in Western Africa, is one country where PMC works. To date, PMC has had a hand in telling stories that address important health and social issues in more than 50 countries. These stories repeatedly demonstrate the power of entertainment-education to improve the health and well-being of families.

PMC’s primary activity has been to create long-running radio serial dramas, like Yam Yankre, that engage audiences with authentic characters and culturally appropriate challenges and opportunities. PMC also produces dramas for television, provides training in effective mass-media communications, advises other media productions, and creates national media strategies – all focused on entertainment-education that use the Sabido methodology to create culturally-specific stories with “positive,” “negative,” and “transitional” characters to model behavior.

François began listening because of his wife. He came home from work, and his wife said, “There is a François just like you in this story…you should listen.” In Yam Yankre, the transitional character’s name is François.

“I recognized myself in the character of François,” says the real-life François. “He is being pushed to have too many children without knowing what to do.”

PMC’s serial dramas address numerous issues, ranging from reproductive health and family planning, to environmental preservation, to child protection, to population stabilization. The goal of every program is to model various viewpoints and interpersonal communication, so that locals talk about the issues and ultimately make their own choices.

Throughout its 15 years, PMC can point to very specific accomplishments on a range of issues. In Ethiopia, 63 percent of new health clinic clients seeking reproductive health services said they were listening to one of PMC’s dramas. In Rwanda, listeners to Umurage Urukwiye were 1.5 times more likely than non-listeners to want three or fewer children. In Nigeria, 67 percent of reproductive health clients in the four northwest states named Ruwan Dare as the motivation to seek health services.

“I spend the majority of my days traveling globally, mostly to places you won’t find in vacation brochures,” says Ryerson. “I see firsthand how the increasing number of people on the planet is affecting the lives of many and hindering development. I have witnessed the struggles with hunger, poverty, and environmental degradation. It drives home to me the continued importance of PMC’s work in partnership with global agencies and foundations. We’re striving to improve opportunities and the health of people in need and to bring about a sustainable planet.”

About Population Media Center (PMC):
Population Media Center (PMC) is a nonprofit, international nongovernmental organization, which strives to improve the health and well-being of people around the world through the use of entertainment-education strategies, like serialized dramas on radio and television, in which characters evolve into role models for the audience for positive behavior change. Founded in 1998, PMC has over 15 years of field experience using the Sabido methodology of behavior change communications, impacting more than 50 countries around the world.