Brazil’s digital and traditional media sectors are in position to score big during the 2014-17 period due to a rare tandem of powerful kicks this market will receive from this year’s World Cup and the Summer Olympics in 2016, according to a new PQ Media report. In spite of daunting inflation, questions about World Cup spending and related civil unrest, Brazil’s consumer-facing media economy is pacing for accelerated 14% growth in 2014, according to Brazil Media & Technology Outlook 2014. 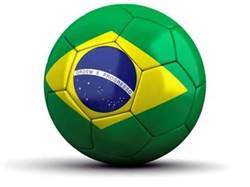 Brazil's media industry is in position to score big during the 2014-17 period, boosted by a powerful pair of kicks from this year's World Cup and the Summer Olympics in 2016.

"Broadcast TV's dominance of the Brazilian media ecosystem is, at once, fueled by and a key driver of product placement spending, powered by a dynamic telenovela genre." - Patrick Quinn, CEO, PQ Media

Brazil’s digital and traditional media sectors are in position to score big over the next three years due to an uncommon pair of strong kicks the emerging market will receive from hosting this year’s World Cup and the Summer Olympics in 2016, according to new market intelligence from PQ Media. Despite severe inflationary pressure, nagging questions about overspending on Cup preparations and related social unrest, Brazil’s consumer-facing media economy will grow 14.1% in 2014, placing it among the five fastest-growing media markets worldwide, according to Brazil Media & Technology Outlook 2014.

Brazil’s double-digit growth this year would mark acceleration from an 11.5% rise in combined media operator revenues and consumer spending on media content and technology in 2013, when the consumer-facing media ecosystem generated $76.53 billion. Overall consumer media usage is also expected to grow at a faster rate this year, climbing 3.5% to a weekly average of 60.9 hours, according to PQ Media. Brazil’s consumer-facing media sector is forecast to expand at fluctuating annual rates throughout the 2013-17 period, driven by even-year boosts of advertising and marketing dollars related to the duo of global mega-events, juxtaposed with consumer spending on wireless devices and other tech products driving growth in odd years.

Brazil’s digital & alternative media operator revenue and consumer spending together grew 15.9% in 2013 to $33.29 billion, fueled by first-ever purchases of the latest digital devices in spite of high inflation that has tripled prices since 2011. Growth is projected to remain strong going forward, although it will decelerate to 15.2% this year as rapid growth in the nascent digital ad & marketing segment will be offset by weaker growth in the larger digital content & tech spending segment, PQ Media found.

In the traditional media sector, where consumers have already upgraded to HDTV to watch their favorite telenovelas, combined media revenues and consumer spending increased 8.4% in 2013 to $43.24 billion. Growth is projected to accelerate at a 13.3% pace in 2014 due to the infusion of advertising and marketing dollars generated by the World Cup, which comes home to soccer’s epicenter for the first time since 1950, according to Brazil Media & Technology Outlook 2014.

“Broadcast TV’s dominance of the Brazilian media ecosystem is, at once, fueled by and a key driver of product placement spending, powered by a dynamic telenovela genre largely responsible for product placement growing at accelerated rates for each of the past four years,” said PQ Media CEO Patrick Quinn. “Brand integrations account for nearly 25% of total digital & alternative marketing revenues in Brazil, nearly four times higher than the global average. As a result, Brazil ranks among the world’s largest and fastest-growing branded entertainment markets.”

Overall traditional media revenues and consumer spending are projected to increase at a 9.2% CAGR in the 2013-17 period, reaching $38.37 billion and making Brazil the world’s fastest-growing traditional media market. Growth will be fueled by ad & marcom investments closely tied to the World Cup and Olympic Games, particularly broadcast TV and radio, driving up time spent with conventional media at a 1.8% CAGR to a weekly average of 56.3 hours in 2017, according to PQ Media.

Brazil is one of the fastest-growing digital media markets worldwide, as broadband and smartphone penetration rates have grown substantially in recent years, particularly in the cities hosting World Cup matches this year. Internet and mobile penetration rates, however, are among the lowest globally, resulting in online and mobile media accounting for smaller shares of combined advertising and marketing revenues. Combined digital & alternative media revenues and consumer spending are forecast to climb at a 12.9% CAGR during the 2013-17 period, reaching $52.78 billion, according to Brazil Media & Technology Outlook 2014.