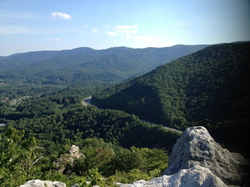 Once complete, the Justin P. Wilson Cumberland Trail will ultimately wind its way more than 300 miles along the eastern portion of the Cumberland Plateau, from Signal Mountain overlooking the Tennessee River near Chattanooga to the Cumberland Gap on the Kentucky border.

For the unwavering advocates and tireless volunteers who’ve worked diligently planning and building Tennessee’s extraordinary first and only linear state park, 2021 has seen a flood of recognition, activity and renewed enthusiasm for the ambitious, 50-year-old project.

“The Cumberland Trail is a tremendous gift for Tennessee, something that goes across the Cumberland Plateau from north-to-south, south-to-north,” Jim Bryson, deputy commissioner of the Tennessee Department of Environment and Conservation, told a gathering of state park rangers, supporters, recreation enthusiasts and trail-building volunteers at a recent event celebrating 50 years since the CT project was launched.

Once complete, the Justin P. Wilson Cumberland Trail -- as it was formally dubbed this year by the Tennessee General Assembly -- will ultimately wind its way more than 300 miles along the eastern portion of the Cumberland Plateau, from Signal Mountain overlooking the Tennessee River near Chattanooga to the Cumberland Gap on the Kentucky border.

In the process it will cut through 11 counties and two time zones along the east-facing rim of the indisputably spectacular Appalachian landform.

Lined with rugged backcountry, regal forests, resplendent waterfalls and stunning rock formations, the Cumberland Trail also boasts a momentous human history and cultural landmarks dating back millennia. “It is beautiful country, stunning country,” Bryson said. “So we want to leave this trail not just for ourselves and our grandchildren, but for our grandchildren’s grandchildren.”

The Cumberland Trail State Park isn’t however just a tool for preserving wildlands and protecting the past for future generations. It is also envisioned as a sustainable means of one day soon steering prosperity-generating tourism revenue into struggling local communities along the plateau.

In 2020, Tennessee’s state park system spurred economic activity to the tune of $1.84 billion, welcoming 34.7 million visitors and providing much-needed safe, natural and healthy escapes for the pandemic-weary masses. If any silver lining to the emergence of the COVID-19 virus can be identified, it’s been a reawakened popular appreciation for the magnificent natural treasures the Volunteer State possesses, and a hopeful expectation that outdoor recreation and rural-oriented tourism will likely play an increasingly prominent role in the state’s economy going forward.

Owing to its location straddling what is expected to become a very popular stretch of the Cumberland Trail, Wartburg in Morgan County is poised to become a “trail town” in a similar vein as the flourishing community of Damascus, Virginia along the Appalachian Trail.

Already something of a hub of outdoor recreation, Wartburg is a natural launchpad for exploring grand landscapes and scenic rivers of great renown, like the Big South Fork, the Obed, the Emory and the Clinch. Construction is set to commence this month on the portion of the Cumberland trail connecting historic downtown Wartburg with Frozen Head State Park, which in turn already connects to one of the longest completed sections of the CT, an arduous and exhilarating 40-some mile trek northeast to Devil’s Racetrack overlooking Caryville in Campbell County.

Currently more than half of the Justin P. Wilson Cumberland Trail’s total projected length is hikeable, and land has already been acquired to extend the trail to 240 miles. More than 50 trailheads give hikers access to roughly 200 miles of open trail, according to the Cumberland Trails Conference, which maintains up-to-date maps, progress reports and general information on the group's website.

In February, the state announced the addition of more than 6,000 acres to the park, signifying that the culmination of the long and toilsome haul that started with a shared conservation-and-recreation vision half a century ago may soon be in sight.

The CT is anticipated to one day ultimately connect with the Pinhoti Trail in Alabama and the Sheltowee Trace in Kentucky, both of which exceed 300 miles in length. The CT will in turn serve as Tennessee’s invaluable contribution to the as-yet-unfinished Great Eastern Trail, which parallels much of the Appalachian Trail to the west.