Pro Mujer announces the retirement of its Co-Founder and Director Emerita Lynne Patterson, whose vision of a world where all women thrive gave birth to one of Latin America's leading women's development organizations. 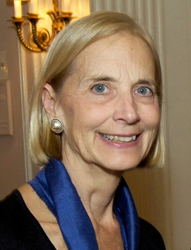 Lynne’s tireless dedication to the women Pro Mujer serves will continue to fuel our mission to transform lives.

Pro Mujer announced today the retirement of its Co-Founder and Director Emerita Lynne Patterson, whose vision of a world where all women thrive gave birth to Pro Mujer 26 years ago. Since Patterson and Co-Founder Carmen Velasco joined forces in El Alto, Bolivia in 1990, the organization has grown to serve more than 250,000 women and their family members annually across five countries in Latin America, and has positioned itself as a thought leader on women’s empowerment and financial inclusion in the region.

Lynne Patterson led Pro Mujer’s expansion efforts in Nicaragua, Peru, Mexico and Argentina, and opened the organization’s international headquarters in New York in 1997. An educator by trade, Patterson has served as a Pro Mujer Ambassador in the United States and United Kingdom and has been a key member of the organization’s Development and Communications teams throughout the years.

Pro Mujer’s CEO and President Maria Cavalcanti commented, “Lynne’s retirement does not signify an end to her invaluable contributions to the organization. She is a valued friend and advisor, and I will continue to look to her for guidance as we take Pro Mujer into the future. Lynne’s tireless dedication to the women Pro Mujer serves will continue to fuel our mission to transform lives.”

Patterson will remain a staunch advocate for gender equality, leading research efforts and playing an important role representing Pro Mujer. On a personal level, she plans to spend more time with her three children; to continue reading voraciously on a number of topics, especially women’s issues; to take in all that New York has to offer; and to continue supporting Pro Mujer.

After a highly successful, fulfilling career, Lynne Patterson retires knowing that Maria Cavalcanti's extraordinary vision for the next 25 years will position Pro Mujer as an innovative platform, offering women in Latin America access to a wide range of transformative services. By leveraging strategic alliances and partnerships, Pro Mujer will reach millions of women throughout Latin America.

On her departure, Patterson states, “I’m very glad that Pro Mujer has the leadership and vision to make the world more just for all. I am so lucky, to have had this experience, the friendships I’ve made and the opportunity to be a part of the Latin American culture. It’s been thrilling. Pro Mujer is in my DNA. I cannot truly leave something that is part of me.”