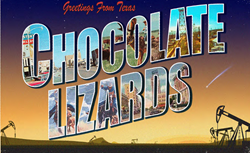 Erwin Vandeveer (Rudy Pankow) is a Harvard-educated actor just recently fired from the first real acting job he's ever had in New Orleans. Headed home to L.A., his car breaks down outside Buffalo Gap, Texas. There, he meets colorful roughneck Merle Luskey (Thomas Haden Church), who is about to lose his oil drilling operation in 30 days unless he can come up with the money to pay off his bank note. Two down-and-outers at the end of their ropes, Erwin and Merle join forces with Faye (Carrie-Anne Moss), the manager of the local cafe and unofficial mayor of Buffalo Gap, in an unlikely scheme to avoid disaster and try to hit an oil bonanza before Merle's time runs out. With a little comical cunning and a lot more luck, the two just may pull off a last-minute miracle.

“We’re excited to make this fan-favorite book into a film featuring local Texans at the helm. In addition, we are thrilled that we have such a wonderful cast to work in a picturesque area of Texas. We are confident that the natural settings will provide the perfect backdrop for this story,” said director and producer Mark Lambert Bristol.
The production will employ approximately 75 Austin crew members, 22 Austin principal actors, and 230 Austin background talent.
Filming will continue through mid-November with an intent on taking the film to several major film festivals throughout 2022.