Psychedelic Feminism Champions Cultural Evolution in the Age of Extinction 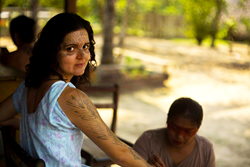 “Our species is responsible for this age of extinction. A true balance of power across the gender spectrum—globally—is the only way humans (and non-humans) will survive.” - Zoe Helene

This November, the environmental feminist group Cosmic Sister is sponsoring female thought leaders and emerging voices to represent the medicine at Spirit Plant Medicine Conference, November 1 – 3 on the University of British Columbia's Vancouver campus, located on the traditional, ancestral, and unceded territory of the Squamish, Musqueam and Tsleil-Waututh First Nations.

“Our species is responsible for this age of extinction. A true balance of power across the gender spectrum—globally—is the only way humans (and non-humans) will survive,” said Cosmic Sister founder Zoe Helene, who coined the term Psychedelic Feminism, which she describes as “a realistic, practical, yet hopeful approach to a much-needed shift of global consciousness.”

Cosmic Sister offers an interconnected quartet of merit-based Psychedelic Feminism educational advocacy grants—Women of the Psychedelic Renaissance, Cosmic Sisters of Cannabis and the original, immersive Plant Spirit Grant—to support women’s voices in psychedelics (and cannabis) culture. The new Emerging Voices Award, launched last month in partnership with the Sleeping Octopus Assembly on Psychedelics (SOAP) in Pittsburgh, PA, helps individuals who demonstrate potential in the field of psychedelics strengthen their visibility in the community. Cosmic Sister will also partner with other reputable events and the Spirit Plant Medicine Conference for this award.

Recipients from Canada and the United States share a passion for human and non-human rights and environmental protection and credit psychedelics for changing the course of their lives for the better. Inspired and action-oriented, they remain hopeful amidst the chaos of challenging times. “National borders and territorial boundaries have nothing to do with the natural world,” says Helene.

WOMEN OF THE PSYCHEDELIC RENAISSANCE GRANTS

Zoe Helene (@CosmicSister), an artist, environmentalist and cultural activist, will present “Psychedelic Feminism—It’s Not All About Us (Humans).” She will not be live-streamed or recorded. “I want to share with those who are present,” she says, “as we would in a sacred space such as a temeno, tipi or maloca. The magic is in the living moment.”

In partnership with Spirit Plant Medicine Conference, the following women received a Cosmic Sister Emerging Voices Award, which includes a complimentary ticket to attend SPMC, on-campus accommodations (for recipients traveling from the United States) and an invitation to participate in an intimate, multi-cultural, women-only pre-conference gathering on October 31. “In many ancient spiritual traditions, this is a sacred night when the veil between the worlds is lifted and ancestors feel more present, a night to celebrate the death of the old, clearing space for rebirth,” Helene explains. “The timing feels perfectly apropos.”

WOMEN OF COLOR IN PSYCHEDELICS

Women of color’s voices are greatly underrepresented in the psychedelic plant community, despite their demonstrated talent for, connection to, and keen interest in these profound medicines. Cosmic Sister is proud to sponsor the panel discussion “Rising Voices: Women of Color in the Sacred Plant Community,” on the main stage. Women of the Psychedelic Renaissance grant recipient and main stage speaker The Dank Duchess will moderate the panel, which includes Cosmic Sister Emerging Voices recipients Tonye Aganaba, Sarinda Hoilett, Sabrina Pilet-Jones and Vanessa Yuen.

“We love and appreciate our male allies,” Helene says, “These men understand that we’re in relationship with each other on the same vulnerable planet and that action is character.”

“We are riding the wave of a revolution in consciousness, a quantum leap in intelligence,” says mycologist and medical researcher Paul Stamets, “If we can harness and use these substances responsibly, we won't fail to create the paradigm shift so critical for our collective survival. Women's voices are fundamental to the conversation.”

Kilham, Helene’s husband and partner and founder of Medicine Hunter, a primary Cosmic Sister sponsor, agrees. “These women are not the voices of tomorrow,” he says, “They are the voices of today.”

“As the temple of wisdom is being re-opened,” says Gray, “this emergence is essential for the rebalancing of the feminine and masculine principles and the healing of the Earth and all her inhabitants.”

“We all need to be on the psychedelic healing bus for this movement to be in balance,” says Haden. “No one gets left behind in our collective quest to heal and to offer healing to individuals, couples, communities and our planet as a whole. Equal representation and cooperation at all levels of the psychedelic renaissance is a must.”

These educational grants would not be possible without community support. Cosmic Sister deeply appreciates tax-deductible donations by way of its fiscal sponsorship with the Multidisciplinary Association for Psychedelic Studies (MAPS). All contributions made through this form will be allocated to Cosmic Sister’s educational advocacy initiatives, minus modest administrative processing fees.

Cosmic Sister (@CosmicSister) is an environmental feminist collective that connects kindred-spirit trailblazing women who understand that true balance of power across the gender spectrum—globally—as the only way humans (and non-humans) will survive. Cosmic Sister’s psychedelic feminism educational advocacy initiatives promote safe, legal, intentional journeying with sacred plants and fungi as a way for women to explore the wilderness within, where they can discover fresh, liberating perspectives on core women’s rights issues. Contact: media@cosmicsister.com. Connect: @CosmicSister

For biographies and photos of grant recipients and more information on these projects, visit Psychedelic Feminism.

ABOUT THE LEAD IMAGE

In the Nova Esperança (“New Hope”) village in the Gregório River Indigenous Territory of the Brazilian Amazon, an indigenous Yawanawá woman applies protective jenipapo butterfly markings, using juice from the jenipapo fruit, on Alice Fortes in preparation for medicine work with uni, the Yawanawá name for ayahuasca, in the deep rainforest.

Founded in 1986, the Multidisciplinary Association for Psychedelic Studies (MAPS) is a 501(c)(3) nonprofit research and educational organization that develops medical, legal, and cultural contexts for people to benefit from the careful uses of psychedelics and marijuana. For more information, please contact Brad Burge, director of communications and marketing, brad@maps.org Connect: @MAPSnews

The intention of Spirit Plant Medicine Conference is to offer accurate, respectful, and most of all beneficial information and inspiration on the use of and larger context around sacred healing plants. Now in its 9th year, the mission of the SPMC is to help guide this work forward by bringing a world-class international group of leading visionary voices to Vancouver. SpiritPlantMedicine.com