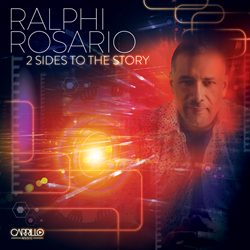 Ralphi Rosario - 2 Sides To The Story

“I wanted this album to catch people by surprise and lead them into a new side of my musical experience. I wanted them to feel the unexpected coming from me,” Ralphi Rosario said.

The new Rosario album includes 18 new tracks plus an added one -hour continuous mix. “2 Sides To The Story” highlights Ralphi Rosario’s diverse music genres as a composer and producer.

“I wanted this album to catch people by surprise and lead them into a new side of my musical experience. I wanted them to feel the unexpected coming from me,” Rosario stated.

Rosario’s “2 Sides Of The Story” debuted in the Top 10 sales chart on Amazon.com in the Dance/Pop section.

Rosario received a Grammy Nomination for “Best remixed Recording” on “Only Girl (in the world)” by Rihanna. The song itself won a Grammy for “Best Dance Recording, “Best Urban Dance Track” at the International Dance Music Awards, “Best Performed Song at the ASCAP Pop Music Awards and the “BMI Pop Award” at the BMI Awards.

“2 Sides To The Story” was executively produced by Rod Carrillo for Carrillo Music, along with Rosario.

“It was great to work with such a down to earth gentleman as Mr. Rosario. He was eager to listen, learn and trust me even when he felt out of his comfort range. Taking such risks proved to be successful in bringing “2 Sides To The Story” to life. It was an organic, natural and enjoyable experience for me,” Carrillo said.

Rosario achieved global recognition with the groundbreaking successes of his international hit records, “You Used to Hold Me,” “Brinca” and “Take Me Up” all three crossover hits that became an overnight house music classics..

In addition to the catapulting success of his classic hits, Rosario has worked and remixed countless tracks for mega pop stars including Ariana Grande, Lady Gaga, Goldfrapp, Beyonce, Mariah Carey, Madonna and countless other recording superstars.

In support of his new album, Rosario announced his “2 Sides of The Story Tour” which will be stopping at the following cities:

“2 Sides of The Story” by Ralphi Rosario is available at all major online retailers Internationally:
iTunes | Amazon | Traxsource