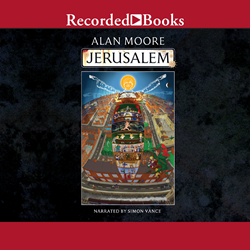 We are truly privileged to work with narrators who have such a high level of devotion to their craft.

All four of RBmedia’s US publishing brands were honored with awards in this year’s Audies competition, most notably Recorded Books for Best Male Narrator. Winners were announced last night in New York City at a gala ceremony hosted by comedian Paula Poundstone.

Simon Vance won Best Male Narrator for his narration of Alan Moore’s epic novel Jerusalem, which at one million words is 200,000 words longer than the Bible. While preparing for this massive undertaking, Simon said, “Jerusalem portrays the heart of England, the author’s hometown of Northampton, so the best research I can think of is actually going there to meet the author and the city itself.” And Simon did indeed travel to England to meet with Alan Moore and research Northampton.

“We are truly privileged to work with narrators who have such a high level of devotion to their craft,” said Troy Juliar, chief content officer for Recorded Books. “The work that goes into recording an audiobook extends far beyond the studio, and we are truly honored to have our work and the work of these authors and narrators acknowledged by the APA.”