As the Maltese real estate market continues to flourish, Real Estate company RE/MAX Malta, commissioned a research company to conduct a quantitative survey to understand the market clearer. The company also released information on property prices and availability of homes on the Island. 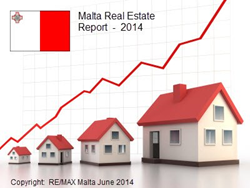 We have to utilise our own resources to keep in touch with the market. Having said that we are fortunate enough to have sold more properties than any other real estate company in Malta and feel that it is our role to share this information.

RE/MAX Real Estate Agency in Malta recently released a market report which has identified a number of trends in the Maltese real estate industry. The company hired Informa Ltd., a research company to conduct two surveys that have focused on, the confidence in home ownership in Malta and the confidence the Maltese population has in real estate agencies.

The company also released statistics on property listing prices from their extensive database of over 15, 000 active property listings, to shed some light on average property prices related to property types and different geographic areas in the Maltese Islands.

The Informa Ltd. survey was a quantitative study of a net sample of 500 respondents. A targeted populace was stratified according to the various areas in Malta & Gozo in order to represent the Maltese population. The statistics from the RE/MAX database were extracted from their property management software namely, iList which provided averages accordingly.

According to the Informa Ltd. survey conducted in March 2014, 93.2% of the Maltese Population believe that owning a home is “very important” or “important” and the main reasons for this is that they stated that home ownership is primarily an investment, which provides security and saves money on rent. From the same survey, 51% of the respondents said that they believed that a real estate agent can assist them in making the right choices of the type of property they want. These findings are very important as they contradict the old, unconfirmed theory that the Maltese population preferred to deal directly with the property owner at a ratio of 7:3. It also is an indication that the Maltese real estate market is moving towards the European Real estate model, where 80% of buyers use estate agents to purchase or sell their home. The survey researched into buying patterns of households where it was confirmed that the female partner in the traditional household is involved in 76% of the decisions when purchasing white goods for the home i.e. a fridge. The questionnaire also gauged what is most important to customers when they search on the Internet for a home on a real estate website. According to the results, the majority of the respondents stated that they look for the location first whereas price, description and then photos were recorded as the second, third and fourth most important respectively.

In the research regarding average listing prices, the company sought to compare pricing differences between geographical areas of the Maltese Islands and respective property types. This was successfully done. One of the related results has confirmed that there is a larger supply of apartments on the market for sale in Malta & Gozo than any other property type. 59% of the RE/MAX database is made up of apartments, whereas the closest other property type was maisonettes which accounted for 13%, with 11% of the database being made up of penthouses. The Malta real estate market report which is available on the RE/MAX Malta website shows that the fact that 59% of the homes on the market are apartments is a social benefit as this large supply allows apartments to remain affordable to the general public.

The report continues to compare the five geographical regions of Malta, namely central, Sliema & surroundings, South & North of Malta and Gozo, whereas the company concludes in their report with a guideline of a number of factors that will assist a homeowner in efficiently pricing their property in today’s market. The report also added that it is important that the Maltese Government continues to promote Malta as a destination of excellence where an individual or a company may either reside in Malta or set up their company and benefit from advantageous conditions, including tax incentives.

The company confirmed that this exercise will be done on a quarterly basis in order to provide better guidance to the general public. Regional Director of RE/MAX Malta Kevin Buttigieg commented that, “Unfortunately even though our industry is one of the pillars of our economy, the authorities have still not invested in the proper research that is required so that we may understand relative trends in our industry based on National statistics. We have to utilise our own resources to keep in touch with the market. Having said that, we are fortunate enough to have sold more properties than any other real estate company in Malta and feel that it is our role to provide something more tangible other than just a survey based on advertised prices.”

The report may be found here: http://www.remax-malta.com/malta-real-estate-market-report-april-2014.aspx.