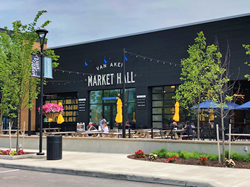 The new Van Aken District has already become a local hot spot due to its eclectic retail shops, restaurants and entertainment. Furthermore, it’s been a major boost to the local economy.

“There is also a new, positive energy regarding local real estate because of ‘The District,’” said Cathy, who, along with James, has sold 10 properties in the area of the District since January. Added James, “The Van Aken District has been very good for real estate, especially in neighborhoods within a mile or so of the development.”

In fact, sales velocity has not been this high in these Shaker Heights neighborhoods in quite some time. This is true, particularly, in the Sussex neighborhood, which had been slow to rebound from the last recession. “In March alone we listed 4 houses in the Sussex neighborhood that were within a half-mile of the Van Aken District,” noted Cathy. “Each home went under contract within 30 days and 2 went under contract within a week. All went very near asking price, or even above.”

It’s also important to note that the buyers and sellers of these properties all mentioned the attractions of the Van Aken District. In addition to its local and regional lifestyle brands, including the Cleveland Clothing Company and Mitchell’s Ice Cream, the Van Aken District features sit-down restaurants, such as Michael’s Genuine and Brassica, outdoor patios and a 21,000-square-foot food hall. Here you will also find Nature’s Oasis, a small footprint, all-natural foods market and cafe, and Rising Star Coffee Roasters.

“For buyers and sellers in the area, the average sale price within a half-mile of the development so far this year is just under $280,000. This is up nearly 10% over the same period last year, and up 25% over 2017,” stated James. “This appreciation certainly seems due to the Van Aken District.”

Furthermore, a number of the homes within a half-mile of the development are great options for first-time home buyers or empty-nesters. “Being within a short distance to new, local eateries and shops is a typically motivating reason for many of these types of buyers,” said Cathy. “This area is also very close to public transportation. It is a terminal stop for the light rail that goes to Shaker Square, downtown Cleveland, and Cleveland Hopkins Airport.”

LeSueur Team member Sean Szczepinski, a “Millenial” and current resident of the Tremont neighborhood of Cleveland puts an additional spin on it. “Many in my generation value being close to restaurants, bars, and shops they like. Many young professionals come to infiltrate and take up residence in neighborhoods where they dine, shop and play. We are specifically seeing that now in the Lomond/Sussex neighborhood. I think momentum actually started as the Van Aken District was under construction. Many of these new Shaker homeowners had the Van Aken District top of mind when deciding where to live.”

Shaker Heights has historically been a very community-oriented city and the Van Aken District plays into that lifestyle. “There is currently a buzz surrounding the Van Aken District. This is similar to what Cleveland saw with Tremont, Detroit-Shoreway and other popular neighborhoods. That buzz is creating a lot of interest for people to move into the community,” concluded James.

About Cathy LeSueur, Howard Hanna Real Estate Services
Cathy LeSueur, during her 35+ years of successful experience, has entered the highly-esteemed ranks of “The Very Best of the Best” and the Top 1% of sales associates with Howard Hanna. Cathy was the top Shaker Heights office producer in 1994, 1996, and 1998-2017. The LeSueur team consistently receives the Quality Service Award for providing outstanding service to her customers and clients. For more information, please call (216) 355-7005, or visit cathylesueur.howardhanna.com.