The State Street Gallery at Robert Morris University Illinois welcomes artist Jesse Howard for a reception celebrating his exhibit, "The Love & Hate of a Culture in Defiance" on October 3. The display continues through October 31. 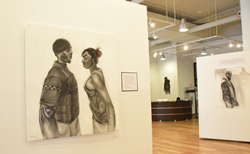 Work from Jesse Howard's exhibit at the State Street Gallery.

The State Street Gallery at Robert Morris University Illinois, 401 S. State Street in Chicago, will hold an artist’s reception on October 3 from 5:00 to 7:00 pm for an exhibit by Maywood artist Jesse Howard. The show, entitled “The Love & Hate of a Culture in Defiance,” consists of several of Howard’s works depicting portraits of African Americans in various positions of emotion and raw humanity. The figures depicted may be homeless or in some way disenfranchised. “For being homeless is being barely visible,” the artist explained. “When one looks at the faces, my audience must acknowledge their presence against disappearing.”

Shelley LaMantia, director of the State Street Gallery, finds the exhibit to be visceral in its impact. “The story, concept, and catalyst behind artwork is most often just as interesting as the work itself,” she said. “In the case of Jesse's work, it is truly significant. Listening to those stories, and hearing Jesse's passion for these societal challenges takes his images to an even deeper level."

Doug Stapleton, Associate Curator of Art at the Illinois State Museum comments, "In Awkward Encounter, a woman confronts a police officer with her direct steady gaze and words, catching the officer off guard. The piece is subtitled “Two Individuals on Opposite Sides of a Social System that Needs to be Challenged.” Both individuals are African-Americans situated on opposing sides of a protest, she representing the challenge, he the system. If we could hear the confrontation, what is being said? This question is the over-arching subject matter of Jesse Howard’s work—the voice and agency of black lives."

Additionally, in this show Howard has added the voices of students from Proviso East High School in Maywood IL through comments written on large sheets of distressed paper. These sheets, dispersed among Howard’s figures add another voice to his artistic engagement with community—the next generation coming up into their present moment.

"The Love & Hate of a Culture in Defiance” continues at the State Street Gallery through October 31. It is open Monday – Thursday, 10:00 a.m. to 6:00 p.m. The gallery is FREE and open to the public.