Recorded Books is the audio publisher for Madeleine Thien’s Do Not Say We Have Nothing, the winner of this year’s Scotiabank Giller Prize. 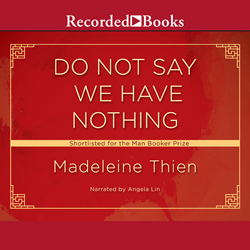 With the news of Thien’s well-deserved recognition, we can now claim exclusive audio rights to six of the last 10 Giller winners dating back to 2007.

Recorded Books, the audiobook publisher of Madeleine Thien’s Do Not Say We Have Nothing, added another credential to its publishing honors when Thien’s novel was named this year’s Scotiabank Giller Prize winner.

“Recorded Books has made a serious commitment to producing Canadian content via our Maple Leaf imprint,” said Recorded Books Director of Acquisitions Brian Sweany. “With the news of Thien’s well-deserved recognition, we can now claim exclusive audio rights to six of the last 10 Giller winners dating back to 2007.”

Thien’s novel was named the winner on November 7 at the 2016 Giller Prize award ceremony at Toronto’s Ritz-Carlton, where CBC Radio’s Steve Patterson hosted the event. The prize awards $100,000 annually to the author of the best Canadian novel or short story collection published in English.

The other finalists, who each received $10,000, included Mona Awad for 13 Ways of Looking at a Fat Girl, Gary Barwin for Yiddish for Pirates, Emma Donoghue for The Wonder, Catherine Leroux for The Party Wall (translated by Lazer Lederhendler) and Zoe Whittall for The Best Kind of People.

Do Not Say We Have Nothing explores the aftermath of China’s cultural revolution through the story of young musicians whose lives are thrown into turmoil. The book earned the 2016 Governor General’s Literary Award for fiction as well as a nomination for the prestigious Man Booker Prize.

Madeleine Thien is also the author of the story collection Simple Recipes, itself a finalist for the Commonwealth Writers’ Prize, a Kiriyama Prize Notable Book, and the winner of the BC Book Prize for Fiction. Her novel Certainty won the Amazon.ca First Novel Award, and her novel Dogs at the Perimeter was shortlisted for Berlin’s 2014 International Literature Award and won the Frankfurt Book Fair’s 2015 LiBeraturpreis.

Thien’s novels and stories have been translated into 25 languages, and her essays have appeared in Granta, the Guardian, the Financial Times, Five Dials, Brick and Al Jazeera. Her story “The Wedding Cake” was shortlisted for the prestigious 2015 Sunday Times EFG Short Story Award. The daughter of Malaysian-Chinese immigrants to Canada, Thien lives in Montreal.

Madeleine Thien’s Do Not Say We Have Nothing audiobook is narrated by Angela Lin. For more information or to purchase the title, visit recordedbooks.com.

About Recorded Books, Inc.
Recorded Books is a leading publisher of spoken-word content. It is the largest independent publisher of audiobooks and provider of digital media to consumer, retail, professional, school, library and infotainment markets. The company owns an exclusive catalog of more than 27,000 audiobook titles narrated by professional, award-winning actors. Recorded Books also provides digital audiobooks and eBooks, as well as other compelling third-party content, including digital magazines and films. The company operates in the United Kingdom through its W. F. Howes subsidiary and in Australia through its Wavesound subsidiary. Recorded Books was founded in 1979 and is headquartered in Prince Frederick, MD. For more information, visit recordedbooks.com.