Among other accolades, Emily Fridlund’s debut, History of Wolves, has been named the #1 Indie Next Pick for January 2017. 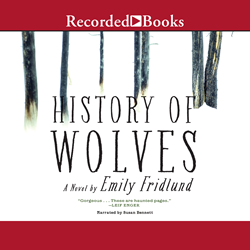 We have no doubt that this is just the first of many future accomplishments we’ll see from Fridlund.

Named the #1 Indie Next Pick for January, Emily Fridlund’s debut, History of Wolves, continues to rack up an impressive series of honors. Published as an audiobook by Recorded Books, the novel was also selected as an Amazon Best Book of the Month, USA Today Notable Book, one of Five Best New Books by People magazine, and a Barnes & Noble Discover Great New Writers selection.

“Recorded Books prides itself on supporting new and emerging voices in the publishing industry,” said Recorded Books Director of Acquisitions Brian Sweany. “It’s extremely rewarding to see talented new writers receive the recognition and praise they deserve. We have no doubt that this is just the first of many future accomplishments we’ll see from Fridlund.”

History of Wolves is a contemporary coming-of-age thriller about a young woman, Linda, living with her parents in a commune in northern Minnesota. An outsider at school, Linda is drawn to a classmate and new teacher, Mr. Grierson. But when Mr. Grierson is alleged to possess child pornography, Linda struggles with the news and with her own sense of identity.

History of Wolves is also the winner of the McGinnis-Ritchie award for its first chapter. Narrated by Susan Bennett, the audiobook was released simultaneously with the print book. Click here to listen to an excerpt from the audiobook.

Libraries can visit the Recorded Books website for more information or to purchase this title on audio.