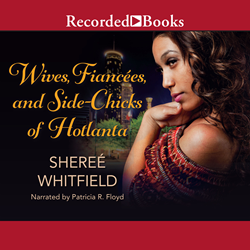 Shereé is a woman who can do it all, and we are confident she will find success as an author as well.

Recorded Books Inc. has bolstered its Griot Audio line of African-American-focused literature with the addition of the audio version of Real Housewives of Atlanta star Shereé Whitfield’s debut novel, Wives, Fiancées, and Side-Chicks of Hotlanta.

One of the most recognizable celebrities from the wildly successful Bravo TV Real Housewives series, Shereé Whitfield is a mom, television personality, socialite, fitness enthusiast, and fashion designer. She is also an executive producer of the WE tv series Selling It in the ATL, which follows seven diverse female real estate agents in Atlanta.

Wives, Fiancées, and Side-Chicks of Hotlanta follows central character Sasha Wellington as the fresh-out-of-college dreamer embarks on a career as a fashion designer and entrepreneur. The audiobook version of the novel, narrated by acclaimed vocal talent Patricia R. Floyd, is part of Recorded Books’ Griot Audio collection, which features the best of African-American literature.

Griot Audio delivers popular fiction, classic tales from award-winning authors, and thought-provoking nonfiction. Having received critical acclaim from such publications as Essence, the New York Times, and Blackboard, the Griot lineup of titles spotlights the works of popular African-American authors and features performances from the most in-demand African-American narrators.

“Recorded Books prides itself on supporting new and diverse voices in the publishing industry,” said Recorded Books Director of Acquisitions Brian Sweany. “Shereé is a woman who can do it all, and we are confident she will find success as an author as well. Griot Audio is one of Recorded Books’ most popular imprints, and we have no doubt that Shereé will add to its success. We’re honored to have published her first novel as an audiobook.”

The Wives, Fiancées, and Side-Chicks of Hotlanta audiobook was released on January 30. Libraries can visit the Recorded Books website for more information or to purchase the audiobook.