Air Canada announced their new service to and from Red Deer Alberta this month which now adds the fast growing Central Alberta city to their international network. Kevin Lapp and his team from the Red Deer realty firm Kevin Lapp Real Estate immediately acknowledged the positive implications by adding the news to their online marketing communications and are planning for big changes in the years ahead. 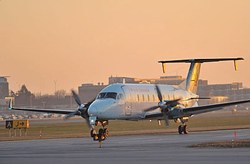 This inclusion of Red Deer into the international flight network has opened up unprecedented access to the economic capital of Canada.

On July 10, 2013 international airline Air Canada put out a news release stating that the city of Red Deer Alberta would join their flight network. As of September 3, 2013 3 daily flights will depart to and from Red Deer (YQF) to Calgary (YYC). This addition not only provides a direct connection between Red Deer and the metropolis of Calgary, it establishes immediate ticketed access to the international hubs of Vancouver, Toronto, Halifax, Newark, and Los Angeles.

The reasons for this addition to the Air Canada network are clear. The Calgary Herald reported on Chief Economist Todd Hirsch's (ATB Financial) statement that YQF is the busiest regional airport in the entire province. Factor in the centralization of the energy sector in Red Deer with the associated labor migration and it's no wonder that the business and leisure traffic moving through the Red Deer airport continues to grow. Red Deer Realtors of the Kevin Lapp Real Estate Team are quick to point at further evidence demanding the inclusion of YQF into the Air Canada network. They note the expansive new home construction in the region and the fact that Red Deer acreage development is on the rise. Kevin Lapp deems this recent Air Canada development as a very big ingredient in attracting new households into Red Deer as opposed to these groups opting to move to higher populous centers like Calgary. With Red Deer now connected to the international flight network Kevin Lapp predicts a lift in local real estate interest and has adjusted his marketing message to include this point. The minute that the news release was picked up by the team it was pushed out on the kevinlapp.ca Red Deer real estate blog and across their social media channels.

Kevin Lapp comments, "We take this news as a big win for the entire city. Of course from a leisure travel angle it makes sense but the business community within Red Deer is also pretty happy. We receive many inquiries from households migrating to Central Alberta and they all consider transportation access and convenience to be of great importance. This inclusion of Red Deer into the international flight network has opened up unprecedented access to the economic capital of Canada. There is no question that local real estate professionals will see a positive impact and thus it makes sense to among the first in our field to communicate this development to the public."

The Kevin Lapp Real Estate Team is a handpicked team of real estate professionals put in place to cover every aspect of the process so that the client, whether buying or selling a home, has complete confidence that they are in the best of hands. Equipped with industry leading methods such as Maximum Exposure Advertising initiatives and Guaranteed Sale Programs, the Kevin Lapp Real Estate Team offers unparalleled client service for anyone buying or selling a home in the Red Deer region. Contact our Red Deer Real Estate Team today.