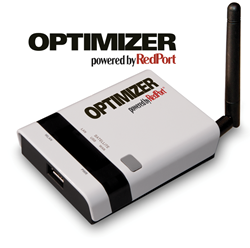 RedPort Global, the leader in advancing satellite data speeds and services, today announced the launch of the Optimizer Personal wXa-122 Satellite Wi-Fi Hotspot. RedPort changed the way people use satellite phones with the introduction of the original Optimizer in 2011; for the first time, satellite phone users could easily access accelerated email, the web, weather data and social media with their Wi-Fi enabled smartphones, tablets, and computers. The updated Optimizer hotspot brings a faster processor to support future services while retaining all of the hotspot’s features, including compatibility with RedPort XGate satellite data services and Halo long-range Wi-Fi extender.

Optimizer is also a key component of the RedPort Halo long-range Wi-Fi extender, where it provides the local hotspot that lets users connect to remote Wi-Fi networks from farther away. Features and specifications for the router can be found on the RedPort Global web site at: http://www.redportglobal.com/marine-satellite-internet-firewall-routers/router-models/optimizer-satellite-firewall-and-wi-fi-hotspot/

Customers control GSM by selecting the country and provider for their SIM, allowing access to GSM as needed, while avoiding GSM when roaming in areas where it is more expensive than satellite.

A powerful firewall accommodates virtually any common installation scenario, with features including block or allow any range of port, IP addresses, and protocols.

Hotspot makes setup and use with compatible computers and tablets easy.

Locally broadcast your GPS location via Wi-Fi for access by any NMEA compliant device.

Works with all standard satellite equipment including:

For more information on how RedPort Global is Making Airtime Count™ – whether ship to shore, or in remote or emergency communications environments, visit http://www.redportglobal.com