Retire to Europe on Less Than $35,000 a Year in These 7 Places—Internationalliving.com

Despite common assumptions about costs being high, a retirement in Old World Europe can, in fact, be affordable. In a new report, the editors at Internationalliving.com pinpoint seven spots in Europe where it’s possible to retire comfortably for less than $35,000 a year. 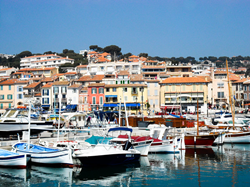 Get outside the big cities and popular tourist destinations, and life can get very affordable

It’s not hard to retire to Europe and enjoy a high quality of life on less than $35,000 a year. In welcoming, warm-weather, good-value escapes, expat retirees can find great bargains and stretch their dollars.

“Europe as a value retirement destination seems kind of counter-intuitive,” says Dan Prescher, senior editor with International Living. “But it takes a little out-of-the-box thinking. Get outside the big cities and popular tourist destinations, and life can get very affordable.”

International Living has identified seven communities where the weather is good and a relaxed Old World lifestyle is surprisingly affordable.

Provence is a sweeping area at the center of the Alps-Provence-Cote d’Azur (PACA) region of southeastern France. It shares a border with the Languedoc-Roussillon region as well as the Auvergne-Rhône-Alps. France’s second largest city, Marseille, is its capital, but visitors tend to gravitate to smaller popular towns, such as Aix-en-Provence, Avignon, and Arles.

Given that Provence offers some of the best year-round weather in France, it’s an ideal retirement location for those seeking long days of sunshine and blue skies. The region boasts 300 days of sun, and warm weather that stretches from April through October. Winters tend to be cool with some rain, but rarely dip beneath 40 F.

Popular towns near the coastline tend to have inflated prices compared to small inland towns. For example, rent for a small, furnished one-bedroom apartment in Aix-en-Provence runs about $920 per month, while the same amount will get you a large, two- or three-bedroom, fully-furnished house with a garden in the hilly green heart of the Var department, about 50 miles further inland.

Find the right spot in Provence, and a couple can live well renting a one-bedroom apartment for $2,695 per month—$32,340 a year.

Seville (population about 700,000 in the city and 1.5 million in the greater metro area) is a mecca for those who love gracious living, southern Spanish style. Located on the Guadalquivir River, the largest navigable river in Spain, Seville is about 50 miles from the Atlantic Ocean.

Winters are relatively mild, with average highs in the 60s F and lows in the 40s F. But summer temperatures, especially in July and August, can soar well over 100 F, with next to no humidity. How better, then, to spend the hot days than in a house with thick stone walls to keep out the heat and a placid central patio, perhaps with a tinkling fountain in the center, and masses of flowers around it? This lifestyle has appealed to Sevillanos for centuries…and in this city, tradition runs strong.

The city is justly famous for its Moorish architecture, bull fighting, flamenco dancing, and lively culinary scene. Seville’s Holy Week (Semana Santa) processions are widely considered the most solemn and impressive in Spain, drawing millions of visitors each year. And its feria (fair) in April, with its wealth of street activities, is also a highlight of the year.

Just 32 square miles in area, Nazaré is a livable city on the coast between Lisbon and Porto. While it’s delightful to explore on foot, reliable bus and taxi service is available. There’s a local market in town as well as supermarkets, more than 100 restaurants and cafés, and other amenities.
There’s already an established expat presence here, although the city is not overrun, as some popular places are, like the southern region of the Algarve, for example.

Nazaré’s climate is temperate, with highs reaching toward 85 F in summer, dipping to averages around 50 F in January, the coldest month. It might not suit those who are looking for year-round sun, but even in November, for example, rainfall averages only three-and-a-half inches compared to the five inches the capital, Lisbon, receives.

The town’s market is within easy walking distance from center, where locals and visitors alike can purchase fresh fruit and vegetables, meat, fish, and bakery items like fried pumpkin cake. Perhaps the most attractive part of Nazaré is Sítio, a primarily residential area. Perched high on a cliff above the coast and town, this suburb offers magnificent views and can be reached by walking (for hearty souls), driving, or taking the funicular from below.

A dignified small city resting on a bluff, Sorrento is a sun-splashed energetic place. Its position on the Sorrentine Peninsula gives it stunning views of Vesuvius looming over Naples as well as the magical rocky island of Capri. There are relaxing cafes, plenty of shops from posh to practical, and a sheltered shoreline below the cliffs.

The city is sort of divided into three parts—the centro old town, the waterfront marinas below the cliffs, and the newer town beyond the ancient city walls. Despite the summer crowds it draws, Sorrento isn’t merely a beach resort; it enjoys a vibrant year-round life. There is a “cultural university” that offers a range of adult cultural classes and volunteer opportunities, along with the University of Mediterranean Cuisine.

The climate is pleasant with hot, dry summers and mild, moist winters. The average temperature in summer is 85 F tempered by sea breezes, and in winter the average temperature runs around 50 F. Expect some rainy days from November through February, but there are theater shows, cinemas, and museums to get you out, and the train to Naples and big city amenities takes just an hour.

In Portugal’s Algarve region, Lagos is blessed with a year-round moderate climate, with average temperatures ranging from 52 F in winter to 75 F in the summertime, when the normal average population of 22,000 swells with visitors from Europe and elsewhere. While landlubbers enjoy golfing, tennis, horseback riding, and hiking, the ocean offers the best of conditions for kayaking, paddle boarding, surfing, kite surfing, windsurfing and more in the area’s tourist-based economy.

It’s easy to get around Lagos on foot. Much of the city is fairly flat, especially around the lovely marina. Buses and taxis are plentiful, and trains go to other regions of the Algarve and even up to Lisbon and beyond.

Despite the tourist-oriented nature of Lagos, particularly during the peak season of July and August, prices are surprisingly reasonable. Including rent, a couple can live well in Lagos on $2,080 per month, or $24,960 a year.

Sitting prettily on the ancient Via Emilia, roughly 80 miles north of Florence, Modena is well-connected and well-heeled. This city is one of the most underrated in Italy—a well-to-do city without being stuffy (or over-priced).

Its classy historic center packs a cultural punch with its monuments, museums, art, and entertainment. No wonder Modena consistently ranks high on Italy’s quality of life index ratings.
The university draws young people from around Italy to study law, medicine, and mechanical engineering—not surprising, given the number of automakers in the area. You can visit Ferrari, Lamborghini, Maserati, and Pagani.

Outside town, vineyards swath the hills and plains, turning out frothy Lambrusco and its lively white equivalent Pignoletto.

Maybe it’s the sparkling wines produced here that gives Modena a bubbly demeanor, or maybe the light-hearted pastels of the buildings. Whatever it is, the ambiance of this city of 175,000 residents is pleasant and somewhat reminiscent of Florence with Renaissance influence.
It is well maintained and well-endowed with parks and culture, thanks in part to Ferrari and other local industrialists whose philanthropy keeps Modena green and clean.

The lifestyle here is relaxed, like most places in Italy, but with a touch of class and culture. In the right spot in Modena a couple can live well for as little as $1,617 per month including rent, or $19,404 a year.

The climate and weather of Granada justify why so many peoples have sought to be here. Set at the foot of the Sierra Nevada mountains, humidity is low, which makes it comfortable to be out and about on foot. Winters can have a chill, but snow rarely lasts in town for more than a day. The hot summers remain dry and humidity-free, nothing that a shaded café and a cold tinto de verano (iced summer wine) can’t counter.

Today, Granada remains a mid-sized town (235,000 people) that one can walk the length of, though the city transit system is so easy, regular, and accessible, it is second to none. Everyone uses it, which makes it both convenient transportation and a social meet-up.

Surrounded by gently rolling foothills, mountains streams, and open meadows filled with olive and fruit trees, Granada is a hiker’s paradise. One can find villages situated in valleys that have been occupied for 5,000 years, and with each new generation, a new layer (and outdoor wine/tapa café) is added to the area’s vivacity.

The full report on these seven affordable European retirement destinations can be found here at Places in Europe Where You Can Retire on $35,000 a Year