John Clarence and Tom Whittle, co-authors of The Gold House trilogy, allege a massive gold theft at White Sands Missile Range had its roots in a meeting more than three years before at Richard Nixon’s La Casa Pacifica home in California. 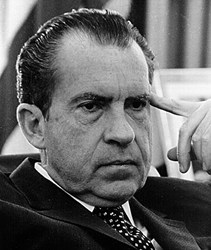 "I know where it could be gotten. It is not easy, but it could be done." Richard Nixon, Watergate Tapes

The Gold House trilogy, a book series by John Clarence and Tom Whittle, allege Nixon's involvement in a massive gold theft during his time as President. The books present documents, reliable sources, and official Watergate testimony by John Dean as persuasive arguments.

Chapter 14 in the book titled "The Lies, The Thefts," divulges the entire memorandum John Ehrlichman, Nixon's Domestic Affairs Advisor, wrote to Treasury Secretary David M. Kennedy and makes for an interesting read. “A concern raised in the Alexander-Nixon-Ehrlichman meeting was that since possession of gold was a violation of the law, [Keith] Alexander would relinquish the gold only if he were not prosecuted,” Clarence said. The authors added in the book, “Kennedy’s response came a week later outlining the Treasury Department’s position on gold found in a treasure trove.” According to the book, Kennedy wrote, “...no license or authority was required to search for, discover, and possess buried treasure.” Kennedy also wrote, “Such a treasure was normally shared on a 50-50 basis with the government.” However, “Nowhere in the Gold Reserve Act did it state the government was entitled to anything,” Clarence said. On February 10, 1971 Secretary Kennedy, an honest and reputable individual, was no longer Secretary of Treasury; the following day Nixon appointed former Texas Governor John Connally.

Clarence and Whittle allege that documents presented in Chapter 8 of "The Lies, The Thefts" uncover the original source of the “50-50” arrangement. “It was rooted in an agreement between President John F. Kennedy’s military aide, Major General Chester Clifton and the Treasury Department in January 1963,” the authors claim. “The Kennedy-Chester arrangement concerned a government-financed excavation of a treasure trove found at Fort Huachuca, Arizona. However, a "50-50" split arrangement was not part of any statute related to The Gold Reserve Act,” they added.

Clarence and Whittle also contend that four months and two weeks after Nixon was elected to a second term, Ehrlichman and White House Counsel John Dean met with Nixon in the Oval Office when the issue of money was discussed. Nixon’s comments during the meeting were recorded on the Watergate tapes: “We could get that. On the money, if you need the money you could get that. You could get a million dollars. You could get it in cash. I know where it could be gotten. It is not easy, but it could be done.”

A number of FBI documents presented in The Gold House trilogy reveal that on Sunday, November 25, 1973, 36.5 tons of gold worth more than one billion dollars (at July 2013 prices), was stolen from White Sands Missile Range. A creditable source named in Chapter 20, entitled: “Events Preceding the Thanksgiving Holiday Weekend Gold Theft” alleged that Nixon was linked to the theft.